Oil. Does it mix with water? No. Biologically, why is this important?

Oil is a lipid. The property of chemically not being able to mix with water gives lipids some very important biological functions. Lipids form the outer membrane of cells. Why? 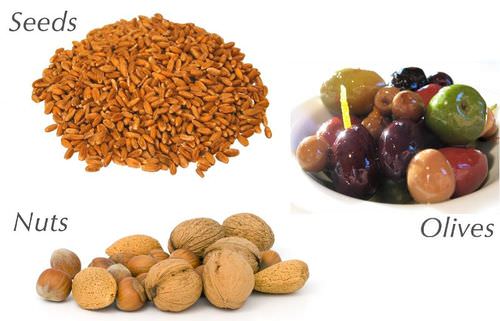 Lipids may consist of fatty acids alone, or they may contain other molecules as well. For example, some lipids contain alcohol or phosphate groups. They include

Triglyceride Molecule. The left part of this triglyceride molecule represents glycerol. Each of the three long chains on the right represents a different fatty acid. From top to bottom, the fatty acids are palmitic acid, oleic acid, and alpha-linolenic acid. The chemical formula for this triglyceride is C55H98O6. KEY:H=hydrogen, C=carbon, O=oxygen

Humans need lipids for many vital functions, such as storing energy and forming cell membranes. Lipids can also supply cells with energy. In fact, a gram of lipids supplies more than twice as much energy as a gram of carbohydrates or proteins. Lipids are necessary in the diet for most of these functions. Although the human body can manufacture most of the lipids it needs, there are others, called essential fatty acids, that must be consumed in food. Essential fatty acids include omega-3 and omega-6 fatty acids. Both of these fatty acids are needed for important biological processes, not just for energy.

Although some lipids in the diet are essential, excess dietary lipids can be harmful. Because lipids are very high in energy, eating too many may lead to unhealthy weight gain. A high-fat diet may also increase lipid levels in the blood. This, in turn, can increase the risk for health problems such as cardiovascular disease. The dietary lipids of most concern are saturated fatty acids, trans fats, and cholesterol. For example, cholesterol is the lipid mainly responsible for narrowing arteries and causing the disease atherosclerosis.