Are dinosaurs evidence of past life forms?

Evolution can be described as a change in species over time. Dinosaur fossils are significant evidence of evolution and of past life on Earth.

The diversity of life on Earth today is the result of evolution. Life began on Earth at least 3.5 to 4 billion years ago, and it has been evolving ever since. At first, all living things on Earth were simple, single-celled organisms. Much later, the first multicellular organisms evolved, and after that, Earth’s biodiversity greatly increased. The figure below shows a timeline of the history of life on Earth. 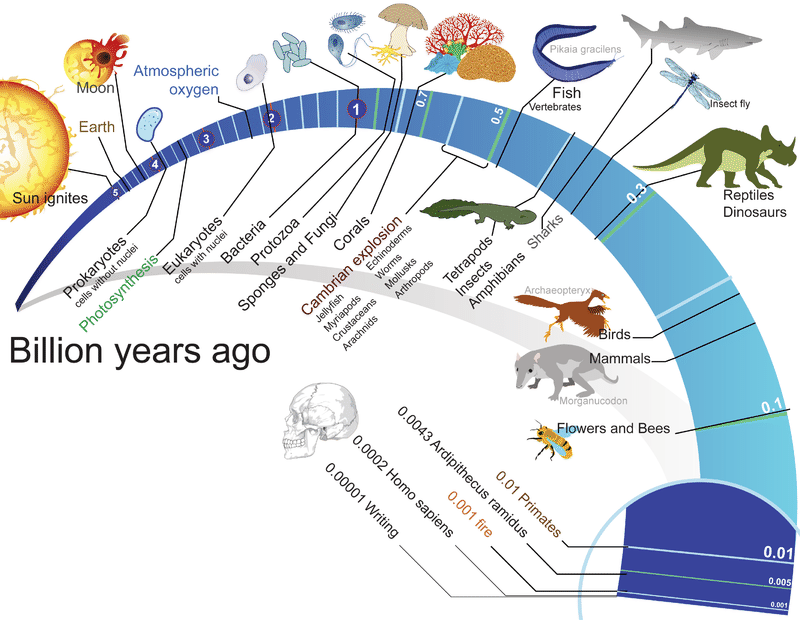 This timeline shows the history of life on Earth. In the entire span of the time, humans are a relatively new addition.

Today, the most accepted theory of life on Earth is evolution, and there is a vast amount of evidence supporting this theory. However, this wasn’t always the case.

Darwin and the Theory of Evolution

The idea of evolution has been around for centuries. In fact, it goes all the way back to the ancient Greek philosopher Aristotle. However, evolution is most often associated with Charles Darwin. Darwin published a book on evolution in 1859 titled On the Origin of Species. In the book, Darwin stated the theory of evolution by natural selection. He also presented a great deal of evidence that evolution occurs.

Evolution is a change in the characteristics of living things over time. As described by Darwin, evolution occurs by a process called natural selection. In natural selection, some members of a species, being better adapted or suited to their environment, produce more offspring than others, so they pass “advantageous traits” to their offspring. Over many generations, this can lead to major changes in the characteristics of the species. Evolution explains how living things are changing today and how modern living things have descended from ancient life forms that no longer exist on Earth. As living things evolve, they generally become better suited for their environment. This is because they evolve adaptations. An adaptation is a trait that helps an organism survive and reproduce in a given environment.

Despite all the evidence Darwin presented, his theory was not well-received at first. Many people found it hard to accept the idea that humans had evolved from an ape-like ancestor, and they saw evolution as a challenge to their religious beliefs. Look at the cartoon in the figure below. Drawn in 1871, it depicts Darwin himself as an ape. The cartoon reflects how many people felt about Darwin and his theory during his own time. Darwin had actually expected this type of reaction to his theory and had waited a long time before publishing his book for this reason. It was only when another scientist, named Alfred Russel Wallace, developed essentially the same theory of evolution that Darwin put his book into print.

Charles Darwin’s name is linked with the theory of evolution. This cartoon from the 1870s makes fun of both Darwin and his theory.

Although Darwin presented a great deal of evidence for evolution in his book, he was unable to explain how evolution occurs. That’s because he knew nothing about genes. As a result, he didn’t know how characteristics are passed from parents to offspring, let alone how they could change over time.

Since Darwin’s time, scientists have gathered even more evidence to support the theory of evolution. Some of the evidence comes from fossils, and some comes from studies that show how similar living things are to one another. By the 1930s, scientists had also learned about genes. As a result, they could finally explain how characteristics of organisms could pass from one generation to the next and change over time.

Using modern technology, scientists can now directly compare the genes of living species. The more genes different species share in common, the more closely related the species are presumed to be. Consider humans and chimpanzees. They share about 98% of their genes. This means that they shared a common ancestor in the not-too-distant past. This is just one of many pieces of evidence that show we are part of the evolution of life on Earth.