As a child, you may have been told that sugar is bad for you. Well, that’s not exactly true. Essentially, carbohydrates are made of sugar, from a single sugar molecule to thousands of sugar molecules attached together. Why? One reason is to store energy. But that does not mean you should eat it by the spoonful.

A monosaccharide is a simple sugar such as fructose or glucose. Fructose is found in fruits, whereas glucose generally results from the digestion of other carbohydrates. Glucose (C6H12O6) is used for energy by the cells of most organisms, and is a product of photosynthesis.

The general formula for a monosaccharide is:

where n can be any number greater than two. For example, in glucose n is 6, and the formula is:

Another monosaccharide, fructose, has the same chemical formula as glucose, but the atoms are arranged differently. Molecules with the same chemical formula but with atoms in a different arrangement are called isomers. Compare the glucose and fructose molecules in the figure below. Can you identify their differences? The only differences are the positions of some of the atoms. These differences affect the properties of the two monosaccharides. 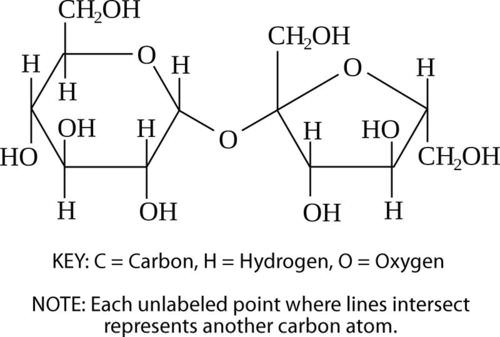 Sucrose Molecule. This sucrose molecule is a disaccharide. It is made up of two monosaccharides: glucose on the left and fructose on the right.

Biofuels: From Sugar to Energy

For years there’s been buzz, both positive and negative, about generating ethanol fuel from corn. Is this a good idea? Is it necessary? These questions need to be discussed. However, the Bay Area of California is rapidly becoming a world center for the next generation of green fuel alternatives. The Joint BioEnergy Institute is developing methods to isolate biofuels from the sugars in cellulose.

As you view Biofuels: Beyond Ethanol, focus on these concepts: