The tertiary structure of proteins is determined by a variety of chemical interactions. These include hydrophobic interactions, ionic bonding, hydrogen bonding and disulfide linkages. Image Attribution: OpenStax Biology

The nature of the R groups found in the amino acids involved can counteract the formation of the hydrogen bonds described for standard secondary structures. For example, R groups with like charges are repelled by each other and those with unlike charges are attracted to each other (ionic bonds).

In nature, some proteins are formed from several polypeptides, also known as subunits, and the interaction of these subunits forms the quaternary structure. Weak interactions between the subunits help to stabilize the overall structure. For example, insulin (a globular protein) has a combination of hydrogen bonds and disulfide bonds that cause it to be mostly clumped into a ball shape.

Insulin starts out as a single polypeptide and loses some internal sequences in the presence of post-translational modification after the formation of the disulfide linkages that hold the remaining chains together. Silk (a fibrous protein), however, has a β-pleated sheet structure that is the result of hydrogen bonding between different chains.

The illustration below shows the four levels of protein structure (primary, secondary, tertiary, and quaternary). 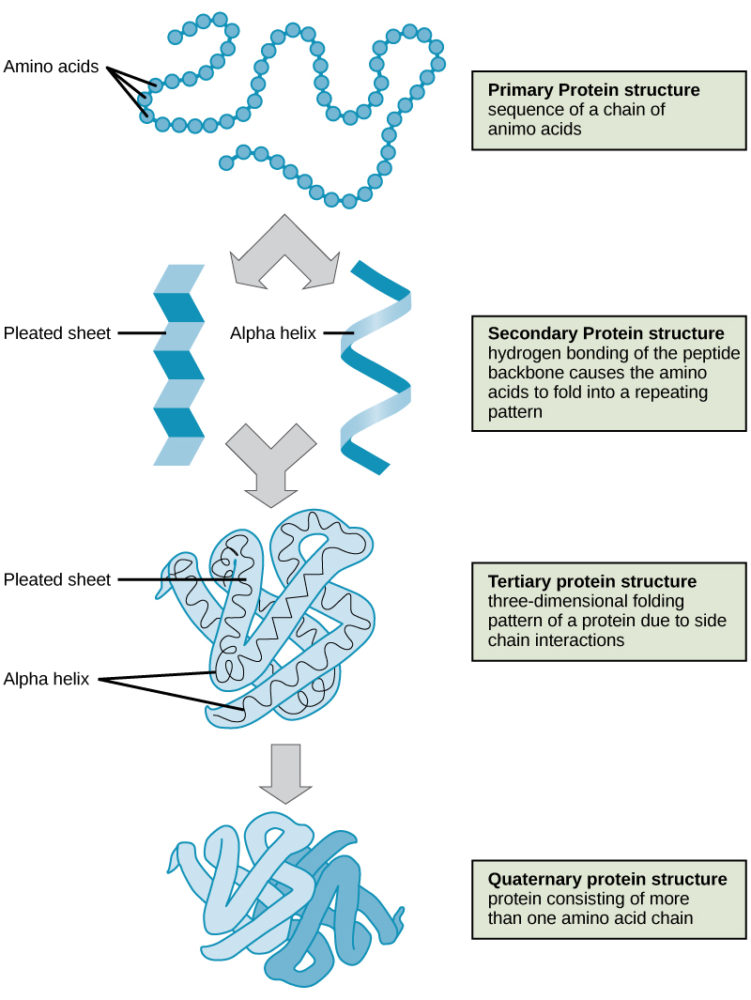 You can observe the four levels of protein structure in these illustrations. Image Attribution: modification of work by National Human Genome Research Institute

Each protein has its own unique sequence and shape that are held together by chemical interactions. If the protein is subject to changes in temperature, pH, or exposure to chemicals, the protein structure may change. This could result in the protein losing its shape without losing its primary sequence. We refer to this phenomenon as denaturation.

Denaturation is often reversible. This is because the primary structure of the polypeptide is conserved in the process if the denaturing agent is removed, allowing the protein to resume its function. Sometimes denaturation is irreversible, leading to loss of function. One example of irreversible protein denaturation is when an egg is fried. The albumin protein in the liquid egg white is denatured when placed in a hot pan (see image below). 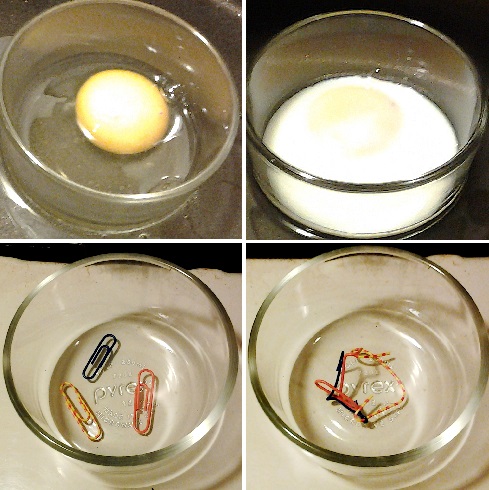 Not all proteins are denatured at high temperatures. For instance, bacteria that survive in hot springs have proteins that function at temperatures close to boiling. The stomach is also very acidic, has a low pH, and denatures proteins as part of the digestion process. However, the digestive enzymes of the stomach retain their activity under these conditions.

Proteins play countless roles throughout the biological world, from catalyzing chemical reactions to building the structures of all living things.

Despite this wide range of functions all proteins are made out of the same twenty amino acids, but combined in different ways. The way these twenty amino acids are arranged dictates the folding of the protein into its unique final shape. Since protein function is based on the ability to recognize and bind to specific molecules, having the correct shape is critical for proteins to do their jobs correctly.

The video below by RCSB Protein Data Bank explores the about the 3D shape, structure and function of proteins.