Summary of lessons so far

Proteins are a class of macromolecules that perform a diverse range of functions for the cell. They help in metabolism by providing structural support and by acting as enzymes, carriers, or hormones.

The building blocks of proteins (monomers) are amino acids. Each amino acid has a central carbon that linked to an amino group, a carboxyl group, a hydrogen atom, and an R group or side chain. There are 20 commonly occurring amino acids, each of which differs in the R group. Each amino acid links to its neighbors by a peptide bond. We refer to a long chain of amino acids as a polypeptide. 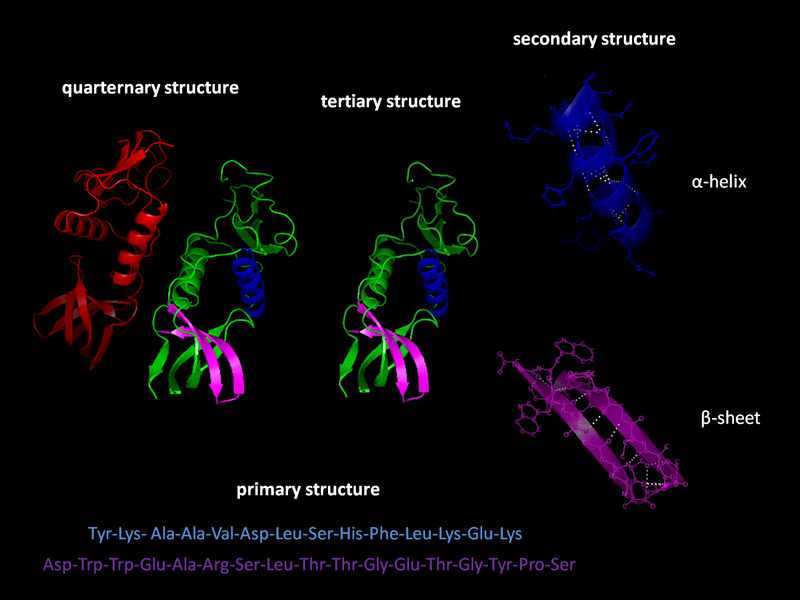 Note that the primary structure here illustrates the amino acids using abbreviations of their names. For example, Lys stands for Lysine, Gly stands for Glycine, and so on. Image Attribution: “Holger87” / Wikimedia Commons (CC BY-SA 3.0)

Protein shape and function are intricately linked. In fact, any change in shape caused by changes in temperature or pH may lead to protein denaturation and a loss in function.

monomer of a protein; has a central carbon or alpha carbon to which an amino group, a carboxyl group, a hydrogen, and an R group or side chain is attached; the R group is different for all 20 amino acids

loss of shape in a protein as a result of changes in temperature, pH, or exposure to chemicals

catalyst in a biochemical reaction; usually a complex or conjugated protein

bond formed between two amino acids by a dehydration reaction

linear sequence of amino acids in a protein

biological macromolecule composed of one or more chains of amino acids

association of discrete polypeptide subunits in a protein