Nucleic acids are the most important macromolecules for the continuity of life. In fact, they carry the genetic blueprint of a cell and carry instructions for the functioning of the cell.

The two main types of nucleic acids are deoxyribonucleic acid (DNA) and ribonucleic acid (RNA). DNA is the genetic material in all living organisms, ranging from single-celled bacteria to multicellular mammals. It is found in the nucleus of eukaryotes and in the organelles, chloroplasts, and mitochondria. However, in prokaryotes, the DNA is not enclosed in a membranous envelope.

We refer to the entire genetic content of a cell as its genome, and the study of genomes is genomics. In eukaryotic cells but not in prokaryotes, DNA forms a complex with histone proteins to form chromatin, the substance of eukaryotic chromosomes. A chromosome may contain tens of thousands of genes. Many genes contain the information to make protein products. Other genes code for RNA products. In general, DNA controls all of the cellular activities by turning the genes “on” or “off.” 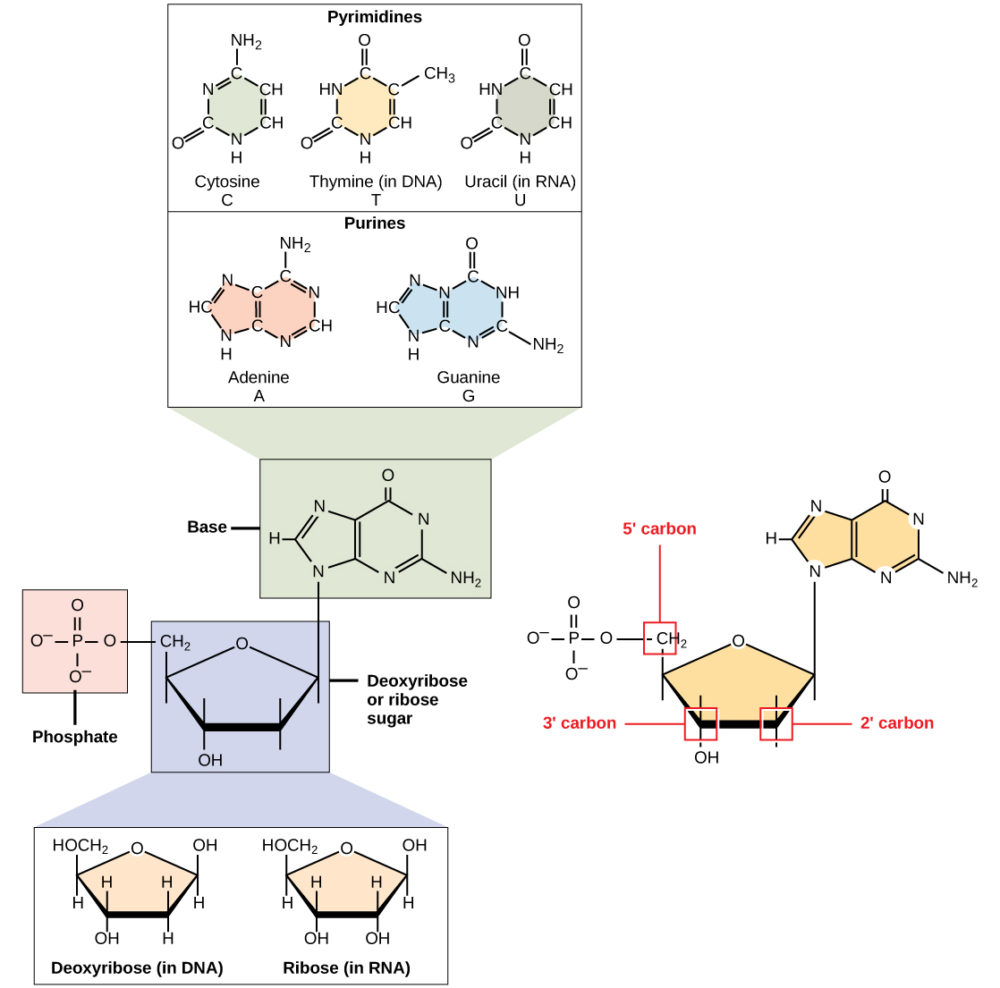 Carbon residues in the pentose are numbered 1′ through 5′ (the prime distinguishes these residues from those in the base, which are numbered without using a prime notation). The base is attached to the 1′ position of the ribose, and the phosphate is attached to the 5′ position. When a polynucleotide forms, the 5′ phosphate of the incoming nucleotide attaches to the 3′ hydroxyl group at the end of the growing chain. Image Attribution: OpenStax Biology

The nitrogenous bases, important components of nucleotides, are organic molecules. In fact, they have that name because they contain carbon and nitrogen. They are bases because they contain an amino group that has the potential of binding an extra hydrogen, and thus, decreases the hydrogen ion concentration in its environment, making it more basic. Each nucleotide in DNA contains one of four possible nitrogenous bases. These are adenine (A), guanine (G) cytosine (C), and thymine (T).