The language used in chemistry is seen and heard in many disciplines, ranging from medicine to engineering to forensics to art. The language of chemistry includes its own vocabulary as well as its own form of shorthand.

Chemical symbols are used to represent atoms and elements. Chemical formulas depict molecules as well as the composition of compounds. Chemical equations provide information about the quality and quantity of the changes associated with chemical reactions.

The next set of lessons will lay the foundation for our study of the language of chemistry. The concepts of this foundation include the atomic theory, the composition and mass of an atom, the variability of the composition of isotopes, ion formation, chemical bonds in ionic and covalent compounds, the types of chemical reactions, and the naming of compounds. We will also introduce one of the most powerful tools for organizing chemical knowledge: the periodic table.

Atomic Theory through the Nineteenth Century

The earliest recorded discussion of the basic structure of matter comes from ancient Greek philosophers, the scientists of their day. In the fifth century BC, Leucippus and Democritus argued that all matter was composed of small, finite particles that they called atomos, a term derived from the Greek word for “indivisible.” They thought of atoms as moving particles that differed in shape and size, and which could join together.

Later, Aristotle and others came to the conclusion that matter consisted of various combinations of the four “elements”—fire, earth, air, and water—and could be infinitely divided. Interestingly, these philosophers thought about atoms and “elements” as philosophical concepts, but apparently never considered performing experiments to test their ideas.

The Aristotelian view of the composition of matter held sway for over two thousand years, until English schoolteacher John Dalton helped to revolutionize chemistry with his hypothesis that the behavior of matter could be explained using an atomic theory. First published in 1807, many of Dalton’s hypotheses about the microscopic features of matter are still valid in modern atomic theory. Here are the postulates of Dalton’s atomic theory.

1. Matter is composed of exceedingly small particles called atoms. An atom is the smallest unit of an element that can participate in a chemical change.

2. An element consists of only one type of atom, which has a mass that is characteristic of the element and is the same for all atoms of that element (see figure below). A macroscopic sample of an element contains an incredibly large number of atoms, all of which have identical chemical properties.

A pre-1982 copper penny (left) contains approximately 3 × 1022 copper atoms (several dozen are represented as brown spheres at the right), each of which has the same chemical properties. Image credit: modification of work by “slgckgc”/Flickr

3. Atoms of one element differ in properties from atoms of all other elements.

4. A compound consists of atoms of two or more elements combined in a small, whole-number ratio. In a given compound, the numbers of atoms of each of its elements are always present in the same ratio (see image below). 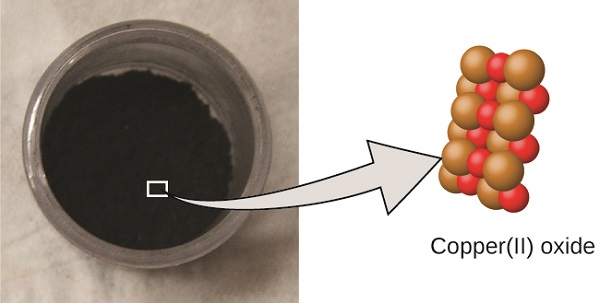 5. Atoms are neither created nor destroyed during a chemical change, but are instead rearranged to yield substances that are different from those present before the change (see image below). 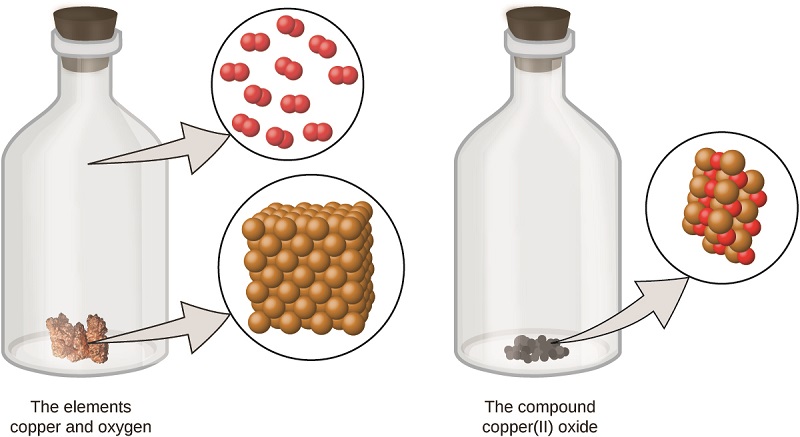 When the elements copper (a shiny, red-brown solid, shown here as brown spheres) and oxygen (a clear and colorless gas, shown here as red spheres) react, their atoms rearrange to form a compound containing copper and oxygen (a powdery, black solid). Image credit: modification of work by http://images-of-elements.com/copper.php, OpenStax, Chemistry

Dalton’s atomic theory provides a microscopic explanation of the many macroscopic properties of matter that you’ve learned about. For example, if an element such as copper consists of only one kind of atom, then it cannot be broken down into simpler substances, that is, into substances composed of fewer types of atoms. And if atoms are neither created nor destroyed during a chemical change, then the total mass of matter present when matter changes from one type to another will remain constant (the law of conservation of matter).