In the pulmonary circulation system, deoxygenated blood leaves the heart through the right ventricle and is transported to the lungs via the pulmonary artery. The pulmonary artery is the only artery that carries deoxygenated blood. It carries blood to the capillaries where carbon dioxide diffuses out of the blood into the alveoli (lung cells) and then into the lungs, where it is exhaled. At the same time, oxygen diffuses into the alveoli, and then enters the blood and is returned to the left atrium of the heart via the pulmonary vein.

Systemic circulation refers to the part of the circulation system that leaves the heart, carrying oxygenated blood to the body’s cells, and returning deoxygenated blood to the heart. Blood leaves through the left ventricle into the aorta, the body’s largest artery. The aorta leads to smaller arteries that supply all organs of the body. These arteries finally branch into capillaries. In the capillaries, oxygen diffuses from the blood into the cells, and waste and carbon dioxide diffuse out of cells and into blood. Deoxygenated blood in capillaries then moves into venules that merge into veins, and the blood is transported back to the heart. These veins merge into two major veins, namely the superior vena cava and the inferior vena cava. The movement of blood is indicated by arrows on the diagram. The deoxygenated blood enters the right atrium via the the superior vena cava. Major arteries supply blood to the brain, small intestine, liver and kidneys. However, systemic circulation also reaches the other organs, including the muscles and skin. The following diagram shows the circulatory system in humans. 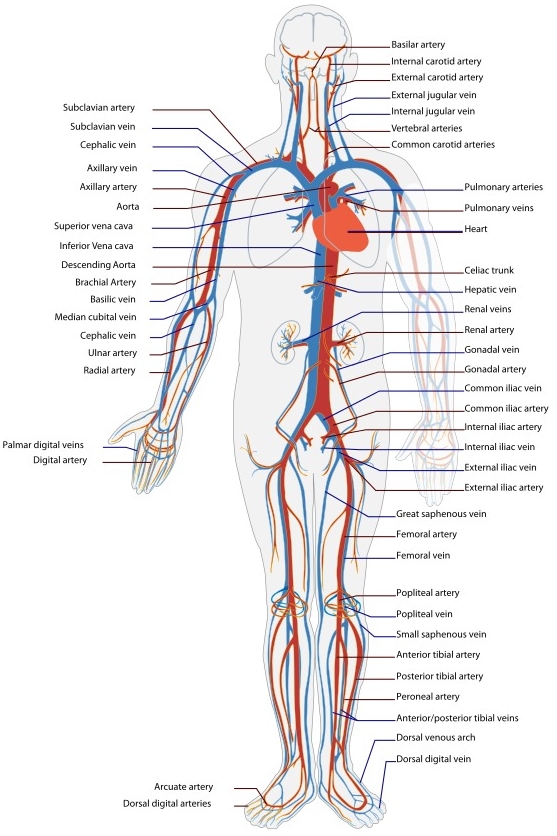 The systemic circulatory system supplies blood to the entire body.

Oxygen forms about 21% of the air around us. In your body, oxygen forms a vital role in the production of energy in most cells. But if gases can only efficiently diffuse across tiny distances, how does oxygen reach the cells deep inside your body? Enda Butler tracks the surprisingly complex journey of oxygen through your body. The TED-Ed video is a lesson by Enda Butler.

This article has been modified from "Circulatory Systems In Animals, by Siyavula, Life Sciences Grade 10, CC BY 4.0. Download the book for free at Siyavula.

This is a lesson from the tutorial, Animal Systems and you are encouraged to log in or register, so that you can track your progress.