An agonist is a muscle that acts to move a limb out of a particular position (contraction). An antagonist is a muscle that acts in opposition to the specific movement generated by the agonist and is responsible for returning the limb back to its original position (relaxation). Antagonistic pairs of muscles are necessary because each muscle can only exert a pulling force. A muscle cannot push itself back to its starting position. Therefore another muscle is required to pull in the opposite direction in order to return the agonist muscle back to its starting position. An example of this canbe found in the contraction and relaxation of the biceps and triceps muscles when moving your forearm.

In the case of the biceps the two bones involved are the scapula (origin) and the humerus (insertion). The biceps muscle gets its name from having two tendons attached to the scapula. The tendons join to form a single muscle body, and then splits again into two tendons, one of which inserts at the radius, and the other of which inserts at the ulna. When the biceps muscle contracts, the forearm is lifted or bent, decreasing the angle between the forearm and humerus and flexing your arm. This ability of the biceps to decrease the angle between the joints results in it being called a flexor muscle. 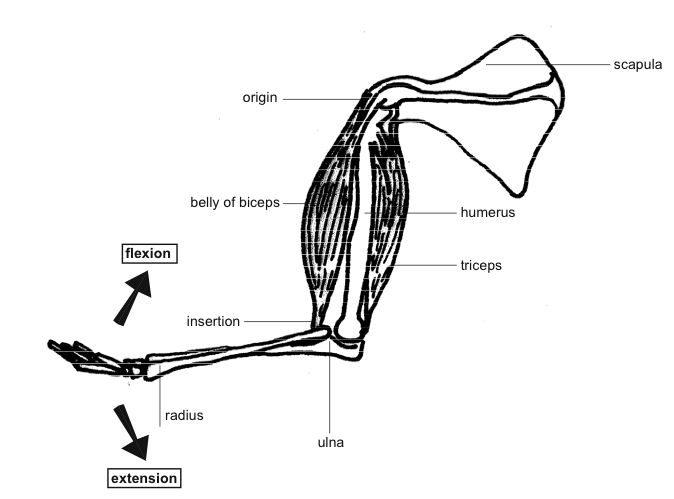 Illustration of the triceps (extensor) and biceps (flexor) muscles

Straightening of the forearm

When the arm is bent the biceps cannot contract since it is already in a contracted state. Muscles can only cause movement by pulling as they contract, not by pushing when they relax. Therefore, the straightening of the arm is brought about by the contraction of the triceps muscle (an extensor muscle) as it increases the angle between forearm and humerus. The triceps has three points of origin, two on the humerus and one on the scapula, and a single point of insertion on the ulna.

Optional Video: The mechanics of the antagonism within the biceps and triceps

This article has been modified from "Musculoskeletal Tissues, by Siyavula, Life Sciences Grade 10, CC BY 4.0. Download the book for free at Siyavula.

This is a lesson from the tutorial, Animal Systems and you are encouraged to log in or register, so that you can track your progress.