When a change occurs in an animal’s environment, an adjustment must be made. The receptor senses the change in the environment, then sends a signal to the control center (in most cases, the brain) which in turn generates a response that is signaled to an effector. The effector is a muscle (that contracts or relaxes) or a gland that secretes. Homeostatsis is maintained by negative feedback loops. Positive feedback loops actually push the organism further out of homeostasis, but may be necessary for life to occur. Homeostasis is controlled by the nervous and endocrine system of mammals.

Another example of an increase as a result of the feedback loop is the control of blood calcium. If calcium levels decrease, specialized cells in the parathyroid gland sense this and release parathyroid hormone (PTH), causing an increased absorption of calcium through the intestines and kidneys and, possibly, the breakdown of bone in order to liberate calcium. The effects of PTH are to raise blood levels of the element. Negative feedback loops are the predominant mechanism used in homeostasis.

A positive feedback loop maintains the direction of the stimulus, possibly accelerating it. Few examples of positive feedback loops exist in animal bodies, but one is found in the cascade of chemical reactions that result in blood clotting, or coagulation. As one clotting factor is activated, it activates the next factor in sequence until a fibrin clot is achieved. The direction is maintained, not changed, so this is positive feedback. Another example of positive feedback is uterine contractions during childbirth, as illustrated in the figure below. The hormone oxytocin, made by the endocrine system, stimulates the contraction of the uterus. This produces pain sensed by the nervous system. Instead of lowering the oxytocin and causing the pain to subside, more oxytocin is produced until the contractions are powerful enough to produce childbirth. 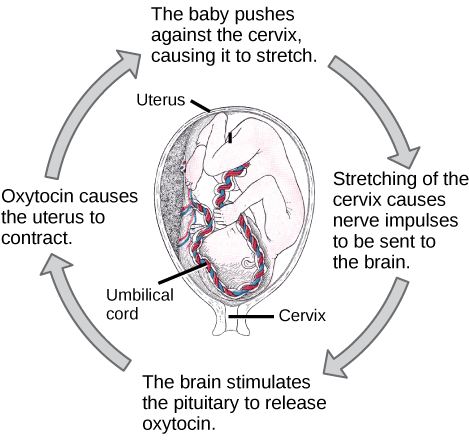 The birth of a human infant is the result of positive feedback.

Changes can be made in a group of body organ systems in order to maintain a set point in another system. This is called acclimatization. This occurs, for instance, when an animal migrates to a higher altitude than it is accustomed to. In order to adjust to the lower oxygen levels at the new altitude, the body increases the number of red blood cells circulating in the blood to ensure adequate oxygen delivery to the tissues. Another example of acclimatization is animals that have seasonal changes in their coats: a heavier coat in the winter ensures adequate heat retention, and a light coat in summer assists in keeping body temperature from rising to harmful levels.

Feedback mechanisms can be understood in terms of driving a race car along a track: watch a short video lesson on positive and negative feedback loops.

This is a lesson from the tutorial, Animal Basic Form and Function and you are encouraged to log in or register, so that you can track your progress.