Once the voters have cast ballots in November and all the election season madness comes to a close, races for governors and local representatives may be over, but the constitutional process of electing a president has only begun. The electors of the Electoral College travel to their respective state capitols and cast their votes in mid-December, often by signing a certificate recording their vote. In most cases, electors cast their ballots for the candidate who won the majority of votes in their state. The states then forward the certificates to the U.S. Senate.

The number of Electoral College votes granted to each state equals the total number of representatives and senators that state has in the U.S. Congress or, in the case of Washington, DC, as many electors as it would have if it were a state. The number of representatives may fluctuate based on state population, which is determined every ten years by the U.S. Census, mandated by Article I, Section 2, of the Constitution. For the 2016 and 2020 presidential elections, there are a total of 538 electors in the Electoral College, and a majority of 270 electoral votes is required to win the presidency.

As political parties became stronger and the Progressive Era’s influence shaped politics from the 1890s to the 1920s, states began to allow state parties rather than legislators to nominate a slate of electors. Electors cannot be elected officials nor can they work for the federal government. Since the Republican and Democratic parties choose faithful party members who have worked hard for their candidates, the modern system decreases the chance they will vote differently from the state’s voters.

There is no guarantee of this, however. Occasionally there are examples of faithless electors. In 2000, the majority of the District of Columbia’s voters cast ballots for Al Gore, and all three electoral votes should have been cast for him. Yet one of the electors cast a blank ballot, denying Gore a precious electoral vote, reportedly to contest the unequal representation of the District in the Electoral College. In 2004, one of the Minnesota electors voted for John Edwards, the vice presidential nominee, to be president and misspelled the candidate’s last name in the process. Some believe this was a result of confusion rather than a political statement. The electors’ names and votes are publicly available on the electoral certificates, which are scanned and documented by the National Archives and easily available for viewing online. 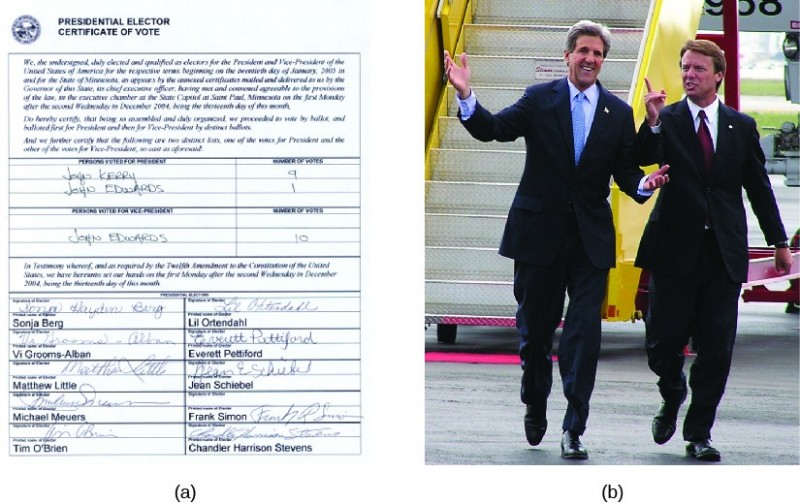 In 2004, Minnesota had an error or faithless voter when one elector cast a vote for John Edwards for president (a). On July 8, 2004, presidential candidate John Kerry and his running mate John Edwards arrive for a campaign rally in Fort Lauderdale, Florida (b). (credit b: modification of work by Richard Block)

This is a lesson from the tutorial, American Voting and Elections and you are encouraged to log in or register, so that you can track your progress.