The days of randomly walking neighborhoods and phone book cold-calling to interview random citizens are gone. Scientific polling has made interviewing more deliberate. Historically, many polls were conducted in person, yet this was expensive and yielded problematic results.

In some situations and countries, face-to-face interviewing still exists. Exit polls, focus groups, and some public opinion polls occur in which the interviewer and respondents communicate in person. Exit polls are conducted in person, with an interviewer standing near a polling location and requesting information as voters leave the polls. Focus groups often choose random respondents from local shopping places or pre-select respondents from Internet or phone surveys. The respondents show up to observe or discuss topics and are then surveyed. 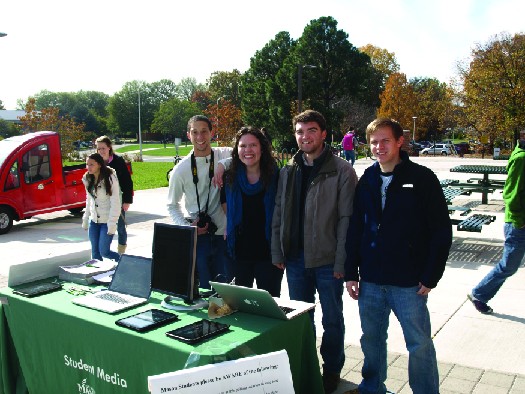 On November 6, 2012, the Connect2Mason.com team conducts exit surveys at the polls on the George Mason University campus. (credit: Mason Votes/Flickr).

When organizations like Gallup or Roper decide to conduct face-to-face public opinion polls, however, it is a time-consuming and expensive process. The organization must randomly select households or polling locations within neighborhoods, making sure there is a representative household or location in each neighborhood.

Then it must survey a representative number of neighborhoods from within a city. At a polling location, interviewers may have directions on how to randomly select voters of varied demographics. If the interviewer is looking to interview a person in a home, multiple attempts are made to reach a respondent if he or she does not answer. Gallup conducts face-to-face interviews in areas where less than 80 percent of the households in an area have phones, because it gives a more representative sample.

Most polling now occurs over the phone or through the Internet. Some companies, like Harris Interactive, maintain directories that include registered voters, consumers, or previously interviewed respondents. If pollsters need to interview a particular population, such as political party members or retirees of a specific pension fund, the company may purchase or access a list of phone numbers for that group. Other organizations, like Gallup, use random-digit-dialing (RDD), in which a computer randomly generates phone numbers with desired area codes. Using RDD allows the pollsters to include respondents who may have unlisted and cellular numbers.

Questions about ZIP code or demographics may be asked early in the poll to allow the pollsters to determine which interviews to continue and which to end early.

Robo-polls are entirely computerized. A computer dials random or pre-programmed numbers and a prerecorded electronic voice administers the survey. The respondent listens to the question and possible answers and then presses numbers on the phone to enter responses. Proponents argue that respondents are more honest without an interviewer. However, these polls can suffer from error if the respondent does not use the correct keypad number to answer a question or misunderstands the question. Robo-polls may also have lower response rates, because there is no live person to persuade the respondent to answer. There is also no way to prevent children from answering the survey. Lastly, the Telephone Consumer Protection Act (1991) made automated calls to cell phones illegal, which leaves a large population of potential respondents inaccessible to robo-polls.

The latest challenges in telephone polling come from the shift in phone usage. A growing number of citizens, especially younger citizens, use only cell phones, and their phone numbers are no longer based on geographic areas. The millennial generation (currently aged 18–33) is also more likely to text than to answer an unknown call, so it is harder to interview this demographic group. Polling companies now must reach out to potential respondents using email and social media to ensure they have a representative group of respondents.

Yet, the technology required to move to the Internet and handheld devices presents further problems. Web surveys must be designed to run on a varied number of browsers and handheld devices. Online polls cannot detect whether a person with multiple email accounts or social media profiles answers the same poll multiple times, nor can they tell when a respondent misrepresents demographics in the poll or on a social media profile used in a poll. These factors also make it more difficult to calculate response rates or achieve a representative sample. Yet, many companies are working with these difficulties, because it is necessary to reach younger demographics in order to provide accurate data.