The most prominent agents of socialization are family and school. Other influential agents are social groups, such as religious institutions and friends, and the media. Political socialization is not unique to the United States. Many nations have realized the benefits of socializing their populations. China, for example, stresses nationalism in schools as a way to increase national unity.

In the United States, one benefit of socialization is that our political system enjoys diffuse support, which is support characterized by a high level of stability in politics, acceptance of the government as legitimate, and a common goal of preserving the system.

These traits keep a country steady, even during times of political or social upheaval. But diffuse support does not happen quickly, nor does it occur without the help of agents of political socialization.

For many children, family is the first introduction to politics. Children may hear adult conversations at home and piece together the political messages their parents support. They often know how their parents or grandparents plan to vote, which in turn can socialize them into political behavior such as political party membership.

Children who accompany their parents on Election Day in November are exposed to the act of voting and the concept of civic duty, which is the performance of actions that benefit the country or community. Families active in community projects or politics make children aware of community needs and politics.

Introducing children to these activities has an impact on their future behavior. Both early and recent findings suggest that children adopt some of the political beliefs and attitudes of their parents.

Children of Democratic parents often become registered Democrats, whereas children in Republican households often become Republicans. Children living in households where parents do not display a consistent political party loyalty are less likely to be strong Democrats or strong Republicans, and instead are often independents. 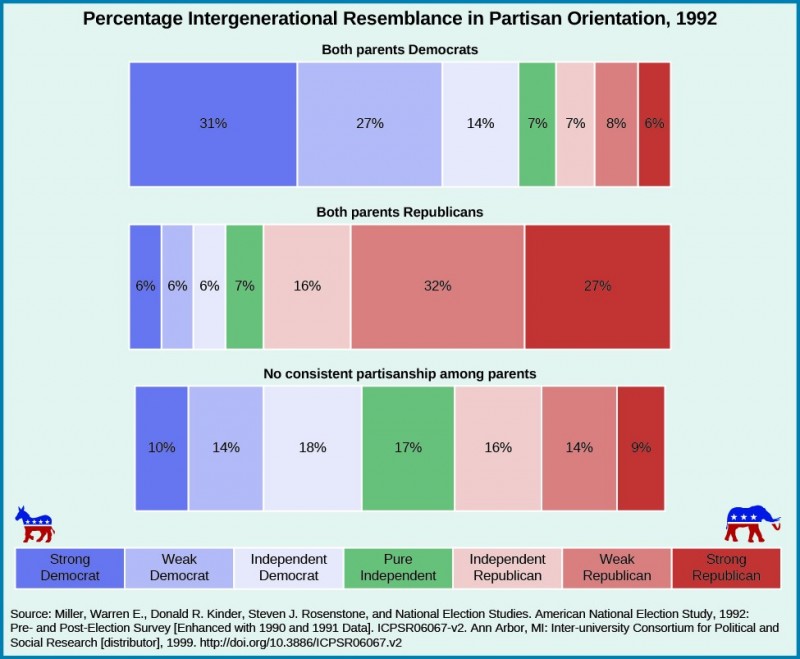 While family provides an informal political education, schools offer a more formal and increasingly important one. The early introduction is often broad and thematic, covering explorers, presidents, victories, and symbols, but generally the lessons are idealized and do not discuss many of the specific problems or controversies connected with historical figures and moments. George Washington’s contributions as our first president are highlighted, for instance, but teachers are unlikely to mention that he owned slaves. Lessons will also try to personalize government and make leaders relatable to children. A teacher might discuss Abraham Lincoln’s childhood struggle to get an education despite the death of his mother and his family’s poverty. Children learn to respect government, follow laws, and obey the requests of police, firefighters, and other first responders. The Pledge of Allegiance becomes a regular part of the school day, as students learn to show respect to our country’s symbols such as the flag and to abstractions such as liberty and equality.

As students progress to higher grades, lessons will cover more detailed information about the history of the United States, its economic system, and the workings of the government. Complex topics such as the legislative process, checks and balances, and domestic policymaking are covered. Introductory economics classes teach about the various ways to build an economy, explaining how the capitalist system works. Many high schools have implemented civic volunteerism requirements as a way to encourage students to participate in their communities. Many offer Advanced Placement classes in U.S. government and history, or other honors-level courses, such as International Baccalaureate or dual-credit courses. These courses can introduce detail and realism, raise controversial topics, and encourage students to make comparisons and think critically about the United States in a global and historical context. College students may choose to pursue their academic study of the U.S. political system further, become active in campus advocacy or rights groups, or run for any of a number of elected positions on campus or even in the local community. Each step of the educational system’s socialization process will ready students to make decisions and be participating members of political society.

We are also socialized outside our homes and schools. When citizens attend religious ceremonies, as 70 percent of Americans in a recent survey claimed, they are socialized to adopt beliefs that affect their politics. Religion leaders often teach on matters of life, death, punishment, and obligation, which translate into views on political issues such as abortion, euthanasia, the death penalty, and military involvement abroad. Political candidates speak at religious centers and institutions in an effort to meet like-minded voters. For example, Senator Ted Cruz (R-TX) announced his 2016 presidential bid at Liberty University, a fundamentalist Christian institution. This university matched Cruz’s conservative and religious ideological leanings and was intended to give him a boost from the faith-based community.

Friends and peers too have a socializing effect on citizens. Communication networks are based on trust and common interests, so when we receive information from friends and neighbors, we often readily accept it because we trust them.

Information transmitted through social media like Facebook is also likely to have a socializing effect. Friends “like” articles and information, sharing their political beliefs and information with one another.

Media—newspapers, television, radio, and the Internet—also socialize citizens through the information they provide. For a long time, the media served as gatekeepers of our information, creating reality by choosing what to present. If the media did not cover an issue or event, it was as if it did not exist. With the rise of the Internet and social media, however, traditional media have become less powerful agents of this kind of socialization.

Another way the media socializes audiences is through framing, or choosing the way information is presented. Framing can affect the way an event or story is perceived. Candidates described with negative adjectives, for instance, may do poorly on Election Day. Consider the recent demonstrations over the deaths of Michael Brown in Ferguson, Missouri, and of Freddie Gray in Baltimore, Maryland. Both deaths were caused by police actions against unarmed African American men. Brown was shot to death by an officer on August 9, 2014. Gray died from spinal injuries sustained in transport to jail in April 2015. Following each death, family, friends, and sympathizers protested the police actions as excessive and unfair. While some television stations framed the demonstrations as riots and looting, other stations framed them as protests and fights against corruption. The demonstrations contained both riot and protest, but individuals’ perceptions were affected by the framing chosen by their preferred information sources.

Finally, media information presented as fact can contain covert or overt political material. Covert content is political information provided under the pretense that it is neutral. A magazine might run a story on climate change by interviewing representatives of only one side of the policy debate and downplaying the opposing view, all without acknowledging the one-sided nature of its coverage. In contrast, when the writer or publication makes clear to the reader or viewer that the information offers only one side of the political debate, the political message is overt content. Political commentators like Rush Limbaugh and publications like Mother Jones openly state their ideological viewpoints. While such overt political content may be offensive or annoying to a reader or viewer, all are offered the choice whether to be exposed to the material.