Elections are the events on which opinion polls have the greatest measured effect. Public opinion polls do more than show how we feel on issues or project who might win an election. The media use public opinion polls to decide which candidates are ahead of the others and therefore of interest to voters and worthy of interview. From the moment President Obama was inaugurated for his second term, speculation began about who would run in the 2016 presidential election. Within a year, potential candidates were being ranked and compared by a number of newspapers.

The speculation included favorability polls on Hillary Clinton, which measured how positively voters felt about her as a candidate. The media deemed these polls important because they showed Clinton as the frontrunner for the Democrats in the next election.

During presidential primary season, we see examples of the bandwagon effect, in which the media pays more attention to candidates who poll well during the fall and the first few primaries. Bill Clinton was nicknamed the “Comeback Kid” in 1992, after he placed second in the New Hampshire primary despite accusations of adultery with Gennifer Flowers. The media’s attention on Clinton gave him the momentum to make it through the rest of the primary season, ultimately winning the Democratic nomination and the presidency.

Wondering how your favorite candidate is doing in the polls? The site RealClearPolitics tracks a number of major polling sources on the major elections, including the presidential and Senate elections.

Polling is also at the heart of horserace coverage, in which, just like an announcer at the racetrack, the media calls out every candidate’s move throughout the presidential campaign. Horserace coverage can be neutral, positive, or negative, depending upon what polls or facts are covered. During the 2012 presidential election, the Pew Research Center found that both Mitt Romney and President Obama received more negative than positive horserace coverage, with Romney’s growing more negative as he fell in the polls.

Horserace coverage is often criticized for its lack of depth; the stories skip over the candidates’ issue positions, voting histories, and other facts that would help voters make an informed decision. Yet, horserace coverage is popular because the public is always interested in who will win, and it often makes up a third or more of news stories about the election.

Exit polls, taken the day of the election, are the last election polls conducted by the media. Announced results of these surveys can deter voters from going to the polls if they believe the election has already been decided. 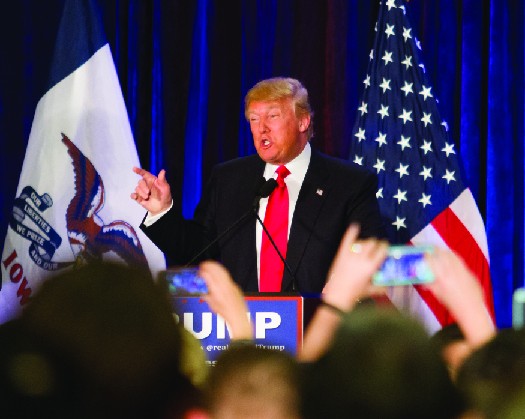 In 2016, Republican presidential candidate Donald Trump became the center of the media’s horserace coverage. As the field winnowed from over twenty candidates down to three, the media incessantly compared everyone else in the field to Trump. (credit: Max Goldberg)

Should Exit Polls Be Banned?

Exit polling seems simple. An interviewer stands at a polling place on Election Day and asks people how they voted. But the reality is different. Pollsters must select sites and voters carefully to ensure a representative and random poll. Some people refuse to talk and others may lie. The demographics of the polled population may lean more towards one party than another. Absentee and early voters cannot be polled. Despite these setbacks, exit polls are extremely interesting and controversial, because they provide early information about which candidate is ahead.

In 1985, a so-called gentleman’s agreement between the major networks and Congress kept exit poll results from being announced before a state’s polls closed.

This tradition has largely been upheld, with most media outlets waiting until 7 p.m. or later to disclose a state’s returns. Internet and cable media, however, have not always kept to the agreement. Sources like Matt Drudge have been accused of reporting early, and sometimes incorrect, exit poll results.

On one hand, delaying results may be the right decision. Studies suggest that exit polls can affect voter turnout. Reports of close races may bring additional voters to the polls, whereas apparent landslides may prompt people to stay home. Other studies note that almost anything, including bad weather and lines at polling places, dissuades voters. Ultimately, it appears exit poll reporting affects turnout by up to 5 percent.

On the other hand, limiting exit poll results means major media outlets lose out on the chance to share their carefully collected data, leaving small media outlets able to provide less accurate, more impressionistic results. And few states are affected anyway, since the media invest only in those where the election is close. Finally, an increasing number of voters are now voting up to two weeks early, and these numbers are updated daily without controversy.

What do you think? Should exit polls be banned? Why or why not?

Public opinion polls also affect how much money candidates receive in campaign donations. Donors assume public opinion polls are accurate enough to determine who the top two to three primary candidates will be, and they give money to those who do well. Candidates who poll at the bottom will have a hard time collecting donations, increasing the odds that they will continue to do poorly. This was apparent in the run-up to the 2016 presidential election. Bernie Sanders, Hillary Clinton, and Martin O’Malley each campaigned in the hope of becoming the Democratic presidential nominee. In June 2015, 75 percent of Democrats likely to vote in their state primaries said they would vote for Clinton, while 15 percent of those polled said they would vote for Sanders. Only 2 percent said they would vote for O’Malley.

By September 2015, 23 percent of likely Democratic voters said they would vote for Sanders, and his summer fundraising total increased accordingly.

Presidents running for reelection also must perform well in public opinion polls, and being in office may not provide an automatic advantage. Americans often think about both the future and the past when they decide which candidate to support.

They have three years of past information about the sitting president, so they can better predict what will happen if the incumbent is reelected. That makes it difficult for the president to mislead the electorate. Voters also want a future that is prosperous. Not only should the economy look good, but citizens want to know they will do well in that economy.

For this reason, daily public approval polls sometimes act as both a referendum of the president and a predictor of success.