Opinions About Politics And Policies

Opinions about Politics and Policies

What do Americans think about their political system, policies, and institutions? Public opinion has not been consistent over the years. It fluctuates based on the times and events, and on the people holding major office. Sometimes a majority of the public express similar ideas, but many times not. Where, then, does the public agree and disagree? Let’s look at the two-party system, and then at opinions about public policy, economic policy, and social policy. 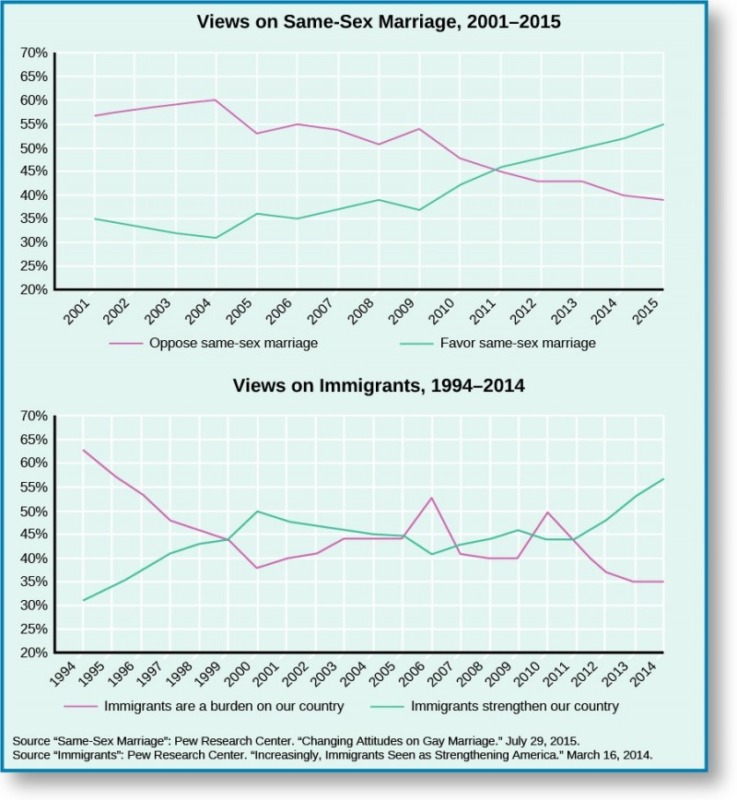 Public opinion may change significantly over time. Two issues that have undergone dramatic shifts in public opinion during the last twenty years are same-sex marriage and immigration.

The United States is traditionally a two-party system. Only Democrats and Republicans regularly win the presidency and, with few exceptions, seats in Congress. The majority of voters cast ballots only for Republicans and Democrats, even when third parties are represented on the ballot. Yet, citizens say they are frustrated with the current party system. Only 32 percent identify themselves as Democrats and only 23 percent as Republicans. Democratic membership has stayed relatively the same, but the Republican Party has lost about 6 percent of its membership over the last ten years, whereas the number of self-identified independents has grown from 30 percent in 2004 to 39 percent in 2014.

Given these numbers, it is not surprising that 58 percent of Americans say a third party is needed in U.S. politics today.

Another shift in politics may be coming from the increasing number of multiracial citizens with strong cultural roots. Almost 7 percent of the population now identifies as biracial or multiracial, and that percentage is likely to grow. The number of citizens identifying as both African American and white doubled between 2000 and 2010, whereas the number of citizens identifying as both Asian American and white grew by 87 percent. The Pew study found that only 37 percent of multiracial adults favored the Republican Party, while 57 percent favored the Democratic Party.

As the demographic composition of the United States changes and new generations become part of the voting population, public concerns and expectations will change as well.

At its heart, politics is about dividing scarce resources fairly and balancing liberties and rights. Public policy often becomes messy as politicians struggle to fix problems with the nation’s limited budget while catering to numerous opinions about how best to do so. While the public often remains quiet, simply answering public opinion polls or dutifully casting their votes on Election Day, occasionally citizens weigh in more audibly by protesting or lobbying.

Some policy decisions are made without public input if they preserve the way money is allocated or defer to policies already in place. But policies that directly affect personal economics, such as tax policy, may cause a public backlash, and those that affect civil liberties or closely held beliefs may cause even more public upheaval. Policies that break new ground similarly stir public opinion and introduce change that some find difficult. The acceptance of same-sex marriage, for example, pitted those who sought to preserve their religious beliefs against those who sought to be treated equally under the law.

Where does the public stand on economic policy? Only 26 percent of citizens surveyed in 2015 thought the U.S. economy was in excellent or good condition, yet 42 percent believed their personal financial situation was excellent to good.

While this seems inconsistent, it reflects the fact that we notice what is happening outside our own home. Even if a family’s personal finances are stable, members will be aware of friends and relatives who are suffering job losses or foreclosures. This information will give them a broader, more negative view of the economy beyond their own pocketbook.

When asked about government spending, the public was more united in wanting policy to be fiscally responsible without raising taxes. In 2011, nearly 73 percent of interviewed citizens believed the government was creating a deficit by spending too much money on social programs like welfare and food stamps, and only 22 percent wanted to raise taxes to pay for them.

When polled on which programs to cut in order to balance the nation’s budget, however, respondents were less united. Nearly 21 percent said to cut education spending, whereas 22 percent wanted to cut spending on health care. Only 12 percent said to cut spending on Social Security. All these programs are used by nearly everyone at some time, which makes them less controversial and less likely to actually be cut. 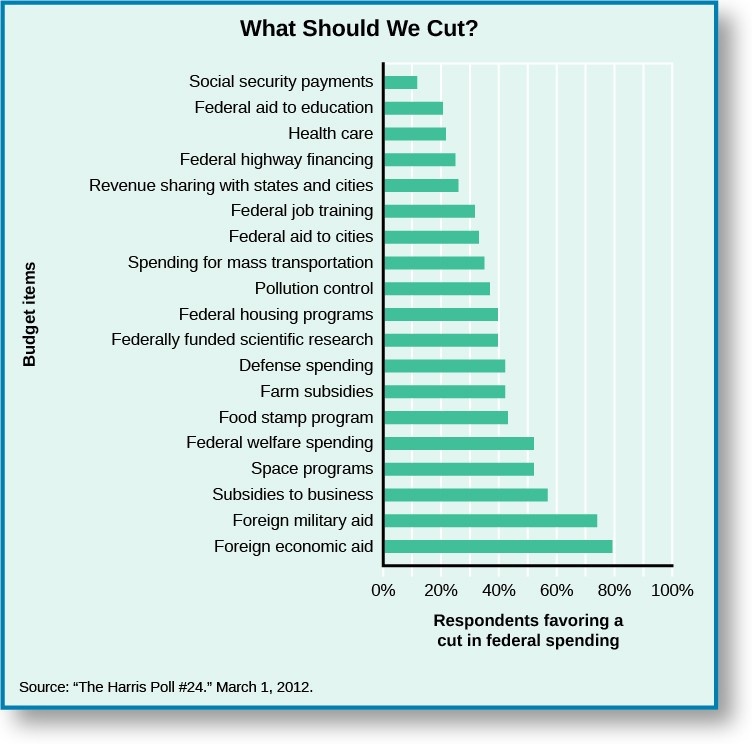 When asked about budget cuts, poll respondents seldom favor cutting programs that directly affect them, such as Social Security or health care.

In general, programs that benefit only some Americans or have unclear benefits cause more controversy and discussion when the economy slows. Few citizens directly benefit from welfare and business subsidies, so it is not surprising that 52 percent of respondents wanted to cut back on welfare and 57 percent wanted to cut back business subsidies. While some farm subsidies decrease the price of food items, like milk and corn, citizens may not be aware of how these subsidies affect the price of goods at the grocery store, perhaps explaining why 44 percent of respondents stated they would prefer to cut back on agricultural subsidies.

Social policy consists of government’s attempts to regulate public behavior in the service of a better society. To accomplish this, government must achieve the difficult task of balancing the rights and liberties of citizens. A person’s right to privacy, for example, might need to be limited if another person is in danger. But to what extent should the government intrude in the private lives of its citizens? In a recent survey, 54 percent of respondents believed the U.S. government was too involved in trying to deal with issues of morality.

Abortion is a social policy issue that has caused controversy for nearly a century. One segment of the population wants to protect the rights of the unborn child. Another wants to protect the bodily autonomy of women and the right to privacy between a patient and her doctor. The divide is visible in public opinion polls, where 51 percent of respondents said abortion should be legal in most cases and 43 percent said it should be illegal in most cases. The Affordable Care Act, which increased government involvement in health care, has drawn similar controversy. In a 2015 poll, 53 percent of respondents disapproved of the act, a 9-percent increase from five years before. Much of the public’s frustration comes from the act’s mandate that individuals purchase health insurance or pay a fine (in order to create a large enough pool of insured people to reduce the overall cost of coverage), which some see as an intrusion into individual decision making.

Laws allowing same-sex marriage raise the question whether the government should be defining marriage and regulating private relationships in defense of personal and spousal rights. Public opinion has shifted dramatically over the last twenty years. In 1996, only 27 percent of Americans felt same-sex marriage should be legal, but recent polls show support has increased to 54 percent.

Despite this sharp increase, a number of states had banned same-sex marriage until the Supreme Court decided, in Obergefell v. Hodges (2015), that states were obliged to give marriage licenses to couples of the same sex and to recognize out-of-state, same-sex marriages.

Some churches and businesses continue to argue that no one should be compelled by the government to recognize or support a marriage between members of the same sex if it conflicts with their religious beliefs. Undoubtedly, the issue will continue to cause a divide in public opinion.

Another area where social policy must balance rights and liberties is public safety. Regulation of gun ownership incites strong emotions, because it invokes the Second Amendment and state culture. Of those polled nationwide, 52 percent believed government should protect the right of citizens to own guns, while 46 percent felt there should be stronger controls over gun ownership.

These numbers change from state to state, however, because of political culture. Immigration similarly causes strife, with citizens fearing increases in crime and social spending due to large numbers of people entering the United States illegally. Yet, 72 percent of respondents did believe there should be a path to citizenship for non-documented aliens already in the country. And while the national government’s drug policy still lists marijuana as an illegal substance, 45 percent of respondents stated they would agree if the government legalized marijuana.