Ideological shifts are more likely to occur if a voter’s ideology is only weakly supported by his or her beliefs. Citizens can also hold beliefs or opinions that are contrary or conflicting, especially if their knowledge of an issue or candidate is limited. And having limited information makes it easier for them to abandon an opinion. Finally, citizens’ opinions will change as they grow older and separate from family.

Citizens use two methods to form an opinion about an issue or candidate. The first is to rely on heuristics, shortcuts or rules of thumb (cues) for decision making. Political party membership is one of the most common heuristics in voting. Many voters join a political party whose platform aligns most closely with their political beliefs, and voting for a candidate from that party simply makes sense. A Republican candidate will likely espouse conservative beliefs, such as smaller government and lower taxes, that are often more appealing to a Republican voter. Studies have shown that up to half of voters make decisions using their political party identification, or party ID, especially in races where information about candidates is scarce.

In non-partisan and some local elections, where candidates are not permitted to list their party identifications, voters may have to rely on a candidate’s background or job description to form a quick opinion of a candidate’s suitability. A candidate for judge may list “criminal prosecutor” as current employment, leaving the voter to determine whether a prosecutor would make a good judge.

The second method is to do research, learning background information before making a decision. Candidates, parties, and campaigns put out a large array of information to sway potential voters, and the media provide wide coverage, all of which is readily available online and elsewhere. But many voters are unwilling to spend the necessary time to research and instead vote with incomplete information.

Gender, race, socio-economic status, and interest-group affiliation also serve as heuristics for decision making. Voters may assume female candidates have a stronger understanding about social issues relevant to women. Business owners may prefer to vote for a candidate with a college degree who has worked in business rather than a career politician. Other voters may look to see which candidate is endorsed by the National Organization of Women (NOW), because NOW’s endorsement will ensure the candidate supports abortion rights.

Opinions based on heuristics rather than research are more likely to change when the cue changes. If a voter begins listening to a new source of information or moves to a new town, the influences and cues he or she meets will change. Even if the voter is diligently looking for information to make an informed decision, demographic cues matter. Age, gender, race, and socio-economic status will shape our opinions because they are a part of our everyday reality, and they become part of our barometer on whether a leader or government is performing well.

A look at the 2012 presidential election shows how the opinions of different demographic groups vary. For instance, 55 percent of women voted for Barack Obama and 52 percent of men voted for Mitt Romney. Age mattered as well—60 percent of voters under thirty voted for Obama, whereas 56 percent of those over sixty-five voted for Romney. Racial groups also varied in their support of the candidates. Ninety-three percent of African Americans and 71 percent of Hispanics voted for Obama instead of Romney.

These demographic effects are likely to be strong because of shared experiences, concerns, and ideas. Citizens who are comfortable with one another will talk more and share opinions, leading to more opportunities to influence or reinforce one another. 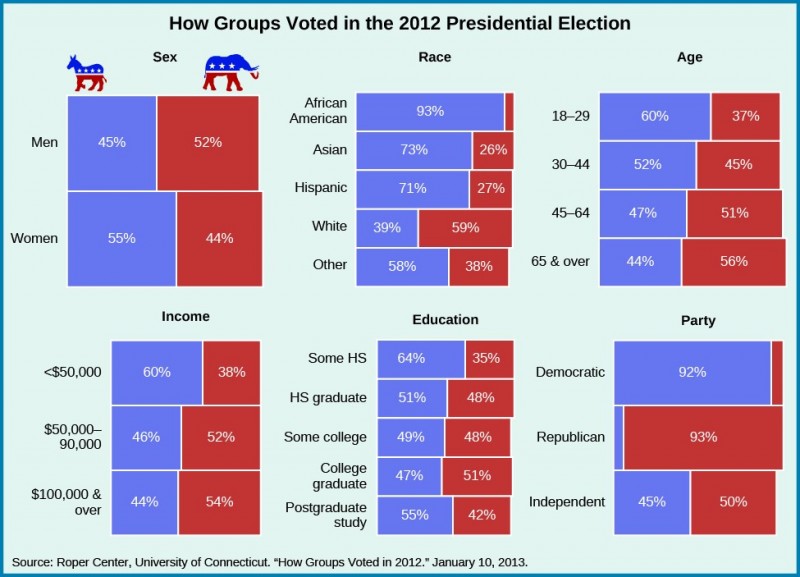 Breaking down voters by demographic groups may reveal very different levels of support for particular candidates or policies among the groups.

The political culture of a state can also have an effect on ideology and opinion. In the 1960s, Daniel Elazar researched interviews, voting data, newspapers, and politicians’ speeches. He determined that states had unique cultures and that different state governments instilled different attitudes and beliefs in their citizens, creating political cultures. Some states value tradition, and their laws try to maintain longstanding beliefs. Other states believe government should help people and therefore create large bureaucracies that provide benefits to assist citizens. Some political cultures stress citizen involvement whereas others try to exclude participation by the masses.

State political cultures can affect the ideology and opinions of those who live in or move to them. For example, opinions about gun ownership and rights vary from state to state. Polls show that 61 percent of all Californians, regardless of ideology or political party, stated there should be more controls on who owns guns.

In contrast, in Texas, support for the right to carry a weapon is high. Fifty percent of self-identified Democrats—who typically prefer more controls on guns rather than fewer—said Texans should be allowed to carry a concealed weapon if they have a permit.

In this case, state culture may have affected citizens’ feelings about the Second Amendment and moved them away from the expected ideological beliefs.

The workplace can directly or indirectly affect opinions about policies, social issues, and political leaders by socializing employees through shared experiences. People who work in education, for example, are often surrounded by others with high levels of education. Their concerns will be specific to the education sector and different from those in other workplaces. Frequent association with colleagues can align a person’s thinking with theirs.

Workplace groups such as professional organizations or unions can also influence opinions. These organizations provide members with specific information about issues important to them and lobby on their behalf in an effort to better work environments, increase pay, or enhance shared governance. They may also pressure members to vote for particular candidates or initiatives they believe will help promote the organization’s goals. For example, teachers’ unions often support the Democratic Party because it has historically supported increased funding to public schools and universities.

Important political opinion leaders, or political elites, also shape public opinion, usually by serving as short-term cues that help voters pay closer attention to a political debate and make decisions about it. Through a talk program or opinion column, the elite commentator tells people when and how to react to a current problem or issue. Millennials and members of generation X (currently ages 34–49) long used Jon Stewart of The Daily Show and later Stephen Colbert of The Colbert Report as shortcuts to becoming informed about current events. In the same way, older generations trusted Tom Brokaw and 60 Minutes.

Because an elite source can pick and choose the information and advice to provide, the door is open to covert influence if this source is not credible or honest. Voters must be able to trust the quality of the information. When elites lose credibility, they lose their audience. News agencies are aware of the relationship between citizens and elites, which is why news anchors for major networks are carefully chosen. When Brian Williams of NBC was accused of lying about his experiences in Iraq and New Orleans, he was suspended pending an investigation. Williams later admitted to several misstatements and apologized to the public, and he was removed from The Nightly News.