A key fact about the U.S. political party system is that it’s all about the votes. If voters do not show up to vote for a party’s candidates on Election Day, the party has no chance of gaining office and implementing its preferred policies. As we have seen, for much of their history, the two parties have been adapting to changes in the size, composition, and preferences of the U.S. electorate. It only makes sense, then, that parties have found it in their interest to build a permanent and stable presence among the voters. By fostering a sense of loyalty, a party can insulate itself from changes in the system and improve its odds of winning elections. The party-in-the-electorate are those members of the voting public who consider themselves to be part of a political party and/or who consistently prefer the candidates of one party over the other.

What it means to be part of a party depends on where a voter lives and how much he or she chooses to participate in politics. At its most basic level, being a member of the party-in-the-electorate simply means a voter is more likely to voice support for a party. These voters are often called party identifiers, since they usually represent themselves in public as being members of a party, and they may attend some party events or functions. Party identifiers are also more likely to provide financial support for the candidates of their party during election season. This does not mean self-identified Democrats will support all the party’s positions or candidates, but it does mean that, on the whole, they feel their wants or needs are more likely to be met if the Democratic Party is successful.

Party identifiers make up the majority of the voting public. Gallup, the polling agency, has been collecting data on voter preferences for the past several decades. Its research suggests that historically, over half of American adults have called themselves “Republican” or “Democrat” when asked how they identify themselves politically. Even among self-proclaimed independents, the overwhelming majority claim to lean in the direction of one party or the other, suggesting they behave as if they identified with a party during elections even if they preferred not to publicly pick a side. Partisan support is so strong that, in a poll conducted from August 5 to August 9, 2015, about 88 percent of respondents said they either identified with or, if they were independents, at least leaned toward one of the major political parties.

Thus, in a poll conducted in January 2016, even though about 42 percent of respondents said they were independent, this does not mean that they are not, in fact, more likely to favor one party over the other. 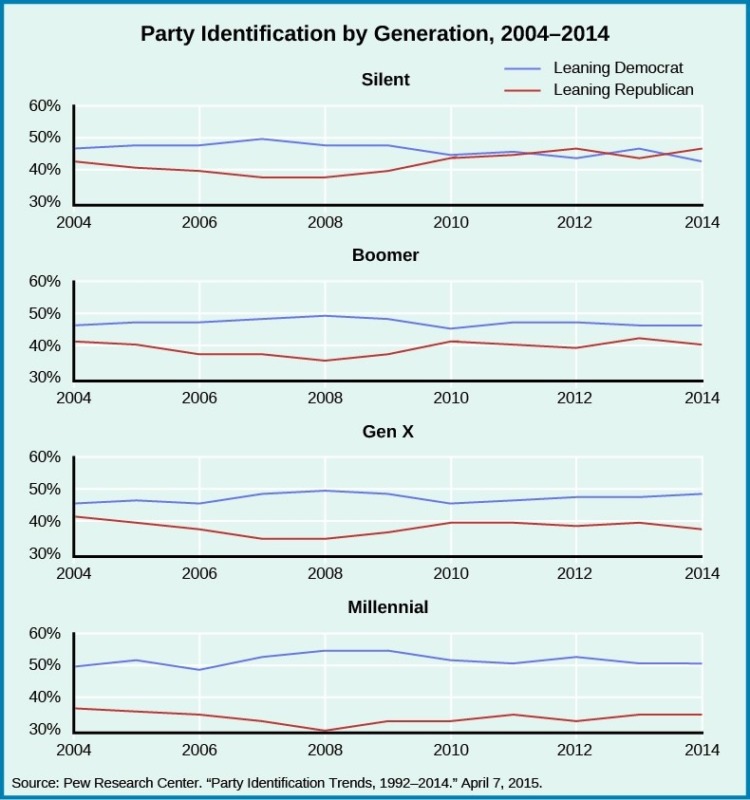 As the chart reveals, generation affects party identification. Millennials (ages 18–34) are more likely to identify as or lean towards the Democratic Party and less likely to favor Republicans than are their baby boomer parents and grandparents (born between 1946 and 1964).

Strictly speaking, party identification is not quite the same thing as party membership. People may call themselves Republicans or Democrats without being registered as a member of the party, and the Republican and Democratic parties do not require individuals to join their formal organization in the same way that parties in some other countries do. Many states require voters to declare a party affiliation before participating in primaries, but primary participation is irregular and infrequent, and a voter may change his or her identity long before changing party registration. For most voters, party identification is informal at best and often matters only in the weeks before an election. It does matter, however, because party identification guides some voters, who may know little about a particular issue or candidate, in casting their ballots. If, for example, someone thinks of him- or herself as a Republican and always votes Republican, he or she will not be confused when faced with a candidate, perhaps in a local or county election, whose name is unfamiliar. If the candidate is a Republican, the voter will likely cast a ballot for him or her.

Party ties can manifest in other ways as well. The actual act of registering to vote and selecting a party reinforces party loyalty. Moreover, while pundits and scholars often deride voters who blindly vote their party, the selection of a party in the first place can be based on issue positions and ideology. In that regard, voting your party on Election Day is not a blind act—it is a shortcut based on issue positions.