Government » American Political Parties » What Are Parties and How Did They Form? 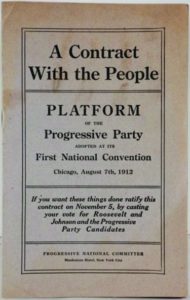 The party platform adopted at the first national convention of the Progressive Party in 1912. Among other items, this platform called for disclosure requirements for campaign contributions, an eight-hour workday, a federal income tax, and women’s suffrage.

In Federalist No. 10, written in the late eighteenth century, James Madison noted that the formation of self-interested groups, which he called factions, was inevitable in any society, as individuals started to work together to protect themselves from the government. Interest groups and political parties are two of the most easily identified forms of factions in the United States. These groups are similar in that they are both mediating institutions responsible for communicating public preferences to the government. They are not themselves government institutions in a formal sense. Neither is directly mentioned in the U.S. Constitution nor do they have any real, legal authority to influence policy.

But whereas interest groups often work indirectly to influence our leaders, political parties are organizations that try to directly influence public policy through its members who seek to win and hold public office. Parties accomplish this by identifying and aligning sets of issues that are important to voters in the hopes of gaining support during elections; their positions on these critical issues are often presented in documents known as a party platform, which is adopted at each party’s presidential nominating convention every four years. If successful, a party can create a large enough electoral coalition to gain control of the government. Once in power, the party is then able to deliver, to its voters and elites, the policy preferences they choose by electing its partisans to the government. In this respect, parties provide choices to the electorate, something they are doing that is in such sharp contrast to their opposition.

You can read the full platform of the Republican Party and the Democratic Party at their respective websites.

Winning elections and implementing policy would be hard enough in simple political systems, but in a country as complex as the United States, political parties must take on great responsibilities to win elections and coordinate behavior across the many local, state, and national governing bodies. Indeed, political differences between states and local areas can contribute much complexity. If a party stakes out issue positions on which few people agree and therefore builds too narrow a coalition of voter support, that party may find itself marginalized. But if the party takes too broad a position on issues, it might find itself in a situation where the members of the party disagree with one another, making it difficult to pass legislation, even if the party can secure victory.

It should come as no surprise that the story of U.S. political parties largely mirrors the story of the United States itself. The United States has seen sweeping changes to its size, its relative power, and its social and demographic composition. These changes have been mirrored by the political parties as they have sought to shift their coalitions to establish and maintain power across the nation and as party leadership has changed. As you will learn later, this also means that the structure and behavior of modern parties largely parallel the social, demographic, and geographic divisions within the United States today. To understand how this has happened, we look at the origins of the U.S. party system.