The Great Compromise And The Basics Of Bicameralism

The Great Compromise and the Basics of Bicameralism

Only a few years after the adoption of the Articles of Confederation, the republican experiment seemed on the verge of failure. States deep in debt were printing increasingly worthless paper currency, many were mired in interstate trade battles with each other, and in western Massachusetts, a small group of Revolutionary War veterans angry over the prospect of losing their farms broke into armed open revolt against the state, in what came to be known as Shays’ Rebellion. The conclusion many reached was that the Articles of Confederation were simply not strong enough to keep the young republic together. In the spring of 1787, a convention was called, and delegates from all the states (except Rhode Island, which boycotted the convention) were sent to Philadelphia to hammer out a solution to this central problem.

The meeting these delegates convened became known as the Constitutional Convention of 1787. Although its prescribed purpose was to revise the Articles of Confederation, a number of delegates charted a path toward disposing of the Articles entirely. Under the Articles, the national legislature had been made up of a single chamber composed of an equal number of delegates from each of the states. Large states, like Virginia, felt it would be unfair to continue with this style of legislative institution. As a result, Virginia’s delegates proposed a plan that called for bicameralism, or the division of legislators into two separate assemblies. In this proposed two-chamber Congress, states with larger populations would have more representatives in each chamber. Predictably, smaller states like New Jersey were unhappy with this proposal. In response, they issued their own plan, which called for a single-chamber Congress with equal representation and more state authority. 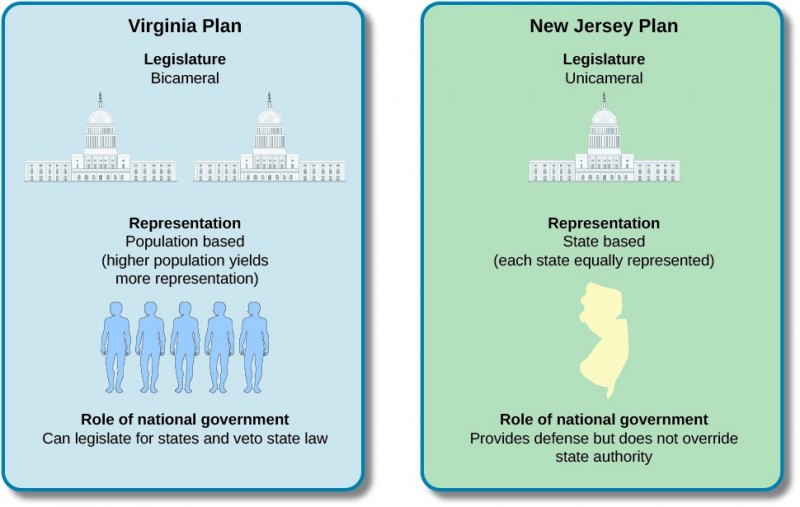 The Virginia or “large state” plan called for a two-chamber legislature, with representation by population in each chamber. The plan proposed by smaller states like New Jersey favored maintaining a one-house Congress in which all states were equally represented.

The storm of debate over how to allocate power between large and small states was eventually calmed by a third proposal. The Connecticut Compromise, also called the Great Compromise, proposed a bicameral congress with members apportioned differently in each house. The upper house, the Senate, was to have two members from each state. This soothed the fears of the small states. In the lower house, the House of Representatives, membership would be proportional to the population in each state. This measure protected the interests of the large states.

In the final draft of the U.S. Constitution, the bicameral Congress established by the convention of 1787 was given a number of powers and limitations. These are outlined in Article I of the American Constitution. This article describes the minimum age of congresspersons (Section 2), requires that Congress meet at least once a year (Section 4), guarantees members’ pay (Section 6), and gives Congress the power to levy taxes, borrow money, and regulate commerce (Section 8). These powers and limitations were the Constitutional Convention’s response to the failings of the Articles of Confederation.

Although the basic design of the House and Senate resulted from a political deal between large and small states, the bicameral legislature established by the convention did not emerge from thin air. The concept had existed in Europe as far back as the medieval era. At that time, the two chambers of a legislature were divided based on class and designed to reflect different types of representation. The names of the two houses in the United Kingdom’s bicameral parliament still reflect this older distinction today: the House of Lords and the House of Commons. Likewise, those at the Constitutional Convention purposely structured the U.S. Senate differently from the House of Representatives in the hopes of encouraging different representative memberships in the two houses. Initially, for example, the power to elect senators was given to the state legislatures instead of to the voting public as it is now. The minimum age requirement is also lower for the House of Representatives: A person must be at least twenty-five years old to serve in the House, whereas one must be at least thirty to be a senator.

The bicameral system established at the Constitutional Convention and still followed today requires the two houses to pass identical bills, or proposed items of legislation. This ensures that after all amending and modifying has occurred, the two houses ultimately reach an agreement about the legislation they send to the president. Passing the same bill in both houses is no easy feat, and this is by design. The framers intended there to be a complex and difficult process for legislation to become law. This challenge serves a number of important and related functions. First, the difficulty of passing legislation through both houses makes it less likely, though hardly impossible, that the Congress will act on fleeting instincts or without the necessary deliberation. Second, the bicameral system ensures that large-scale dramatic reform is exceptionally difficult to pass and that the status quo is more likely to win the day. This maintains a level of conservatism in government, something the landed elite at the convention preferred. Third, the bicameral system makes it difficult for a single faction or interest group to enact laws and restrictions that would unfairly favor it.

The website of the U.S. Congress Visitor Center contains a number of interesting online exhibits and informational tidbits about the U.S. government’s “first branch” (so called because it is described in Article I of the Constitution).