Ethnic, racial, gender, or ideological identity aside, it is a representative’s actions in Congress that ultimately reflect his or her understanding of representation. Congress members’ most important function as lawmakers is writing, supporting, and passing bills. And as representatives of their constituents, they are charged with addressing those constituents’ interests. Historically, this job has included what some have affectionately called “bringing home the bacon” but what many (usually those outside the district in question) call pork-barrel politics. As a term and a practice, pork-barrel politics—federal spending on projects designed to benefit a particular district or set of constituents—has been around since the nineteenth century, when barrels of salt pork were both a sign of wealth and a system of reward. While pork-barrel politics are often deplored during election campaigns, and earmarks—funds appropriated for specific projects—are no longer permitted in Congress (see feature box below), legislative control of local appropriations nevertheless still exists. In more formal language, allocation, or the influencing of the national budget in ways that help the district or state, can mean securing funds for a specific district’s project like an airport, or getting tax breaks for certain types of agriculture or manufacturing.

The language and metaphors of war and violence are common in politics. Candidates routinely “smell blood in the water,” “battle for delegates,” go “head-to-head,” “cripple” their opponent, and “make heads roll.” But references to actual violence aren’t the only metaphorical devices commonly used in politics. Another is mentions of food. Powerful speakers frequently “throw red meat to the crowds;” careful politicians prefer to stick to “meat-and-potato issues;” and representatives are frequently encouraged by their constituents to “bring home the bacon.” And the way members of Congress typically “bring home the bacon” is often described with another agricultural metaphor, the “earmark.”

In ranching, an earmark is a small cut on the ear of a cow or other animal to denote ownership. Similarly, in Congress, an earmark is a mark in a bill that directs some of the bill’s funds to be spent on specific projects or for specific tax exemptions. Since the 1980s, the earmark has become a common vehicle for sending money to various projects around the country. Many a road, hospital, and airport can trace its origins back to a few skillfully drafted earmarks.

Relatively few people outside Congress had ever heard of the term before the 2008 presidential election, when Republican nominee Senator John McCain touted his career-long refusal to use the earmark as a testament to his commitment to reforming spending habits in Washington.

McCain’s criticism of the earmark as a form of corruption cast a shadow over a previously common legislative practice. As the country sank into recession and Congress tried to use spending bills to stimulate the economy, the public grew more acutely aware of its earmarking habits. Congresspersons then were eager to distance themselves from the practice. In fact, the use of earmarks to encourage Republicans to help pass health care reform actually made the bill less popular with the public.

In 2011, after Republicans took over the House, they outlawed earmarks. But with deadlocks and stalemates becoming more common, some quiet voices have begun asking for a return to the practice. They argue that Congress works because representatives can satisfy their responsibilities to their constituents by making deals. The earmarks are those deals. By taking them away, Congress has hampered its own ability to “bring home the bacon.”

Are earmarks a vital part of legislating or a corrupt practice that was rightly jettisoned? Pick a cause or industry, and investigate whether any earmarks ever favored it, or research the way earmarks have hurt or helped your state or district, and decide for yourself.

Follow-up activity: Find out where your congressional representative stands on the ban on earmarks and write to support or dissuade him or her.

Such budgetary allocations aren’t always looked upon favorably by constituents. Consider, for example, the passage of the ACA in 2010. The desire for comprehensive universal health care had been a driving position of the Democrats since at least the 1960s. During the 2008 campaign, that desire was so great among both Democrats and Republicans that both parties put forth plans. When the Democrats took control of Congress and the presidency in 2009, they quickly began putting together their plan. Soon, however, the politics grew complex, and the proposed plan became very contentious for the Republican Party.

Nevertheless, the desire to make good on a decades-old political promise compelled Democrats to do everything in their power to pass something. They offered sympathetic members of the Republican Party valuable budgetary concessions; they attempted to include allocations they hoped the opposition might feel compelled to support; and they drafted the bill in a purposely complex manner to avoid future challenges. These efforts, however, had the opposite effect. The Republican Party’s constituency interpreted the allocations as bribery and the bill as inherently flawed, and felt it should be scrapped entirely. The more Democrats dug in, the more frustrated the Republicans became. 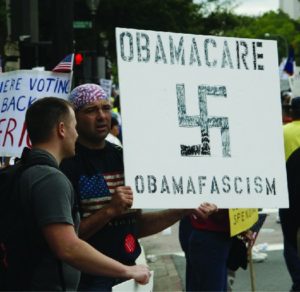 In 2009, the extended debates and legislative maneuvering in Congress over the proposed health care reform bill triggered a firestorm of disapproval from the Republicans and protests from their supporters. In many cases, hyperbole ruled the day. (credit: “dbking”/Flickr)

The Republican opposition, which took control of the House during the 2010 midterm elections, promised constituents they would repeal the law. Their attempts were complicated, however, by the fact that Democrats still held the Senate and the presidency. Yet, the desire to represent the interests of their constituents compelled Republicans to use another tool at their disposal, the symbolic vote. During the 112th and 113th Congresses, Republicans voted more than sixty times to either repeal or severely limit the reach of the law. They understood these efforts had little to no chance of ever making it to the president’s desk. And if they did, he would certainly have vetoed them. But it was important for these representatives to demonstrate to their constituents that they understood their wishes and were willing to act on them.

This has exerted pressure on representatives to the extent that some now pursue a more straightforward delegate approach to representation. Indeed, following the 2010 election, a handful of Republicans began living in their offices in Washington, convinced that by not establishing a residence in Washington, they would appear closer to their constituents at home.