The importance of airing positive constituent casework during campaigns is a testament to the accuracy of saying, “All politics is local.” This phrase, attributed to former Speaker of the House Tip O’Neill (D-MA), essentially means that the most important motivations directing voters are rooted in local concerns. In general, this is true. People naturally feel more driven by the things that affect them on a daily basis. These are concerns like the quality of the roads, the availability of good jobs, and the cost and quality of public education. Good senators and representatives understand this and will seek to use their influence and power in office to affect these issues for the better. This is an age-old strategy for success in office and elections.

Political scientists have taken note of some voting patterns that appear to challenge this common assumption, however. In 1960, political scientist Angus Campbell proposed the surge-and-decline theory to explain these patterns.

Campbell noticed that since the Civil War, with the exception of 1934, the president’s party has consistently lost seats in Congress during the midterm elections. He proposed that the reason was a surge in political stimulation during presidential elections, which contributes to greater turnout and brings in voters who are ordinarily less interested in politics. These voters, Campbell argued, tend to favor the party holding the presidency. In contrast, midterm elections witness the opposite effect. They are less stimulating and have lower turnout because less-interested voters stay home. This shift, in Campbell’s theory, provides an advantage to the party not currently occupying the presidency.

In the decades since Campbell’s influential theory was published, a number of studies have challenged his conclusions. Nevertheless, the pattern of midterm elections benefiting the president’s opposition has persisted. Only in exceptional years has this pattern been broken: first in 1998 during President Bill Clinton’s second term and the Monica Lewinsky scandal, when exit polls indicated most voters opposed the idea of impeaching the president, and then again in 2002, following the 9/11 terrorist attacks and the ensuing declaration of a “war on terror.”

The evidence does suggest that national concerns, rather than local ones, can function as powerful motivators at the polls. Consider, for example, the role of the Iraq War in bringing about a Democratic rout of the Republicans in the House in 2006 and in the Senate in 2008. Unlike previous wars in Europe and Vietnam, the war in Iraq was fought by a very small percentage of the population. The vast majority of citizens were not soldiers, few had relatives fighting in the war, and most did not know anyone who directly suffered from the prolonged conflict. Voters in large numbers were motivated by the political and economic disaster of the war to vote for politicians they believed would end it. 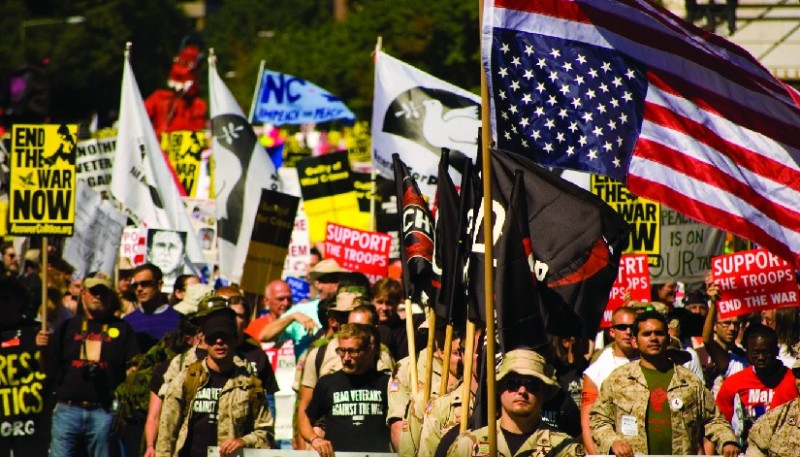 Wars typically have the power to nationalize local elections. What makes the Iraq War different is that the overwhelming majority of voters had little to no intimate connection with the conflict and were motivated to vote for those who would end it. (credit: “Lipton sale”/Wikimedia Commons)

Congressional elections may be increasingly driven by national issues. Just two decades ago, straight-ticket, party-line voting was still relatively rare across most of the country. In much of the South, which began to vote overwhelmingly Republican in presidential elections during the 1960s and 1970s, Democrats were still commonly elected to the House and Senate. The candidates themselves and the important local issues, apart from party affiliation, were important drivers in congressional elections. This began to change in the 1980s and 1990s, as Democratic representatives across the region began to dwindle. And the South isn’t alone; areas in the Northeast and the Northwest have grown increasingly Democratic. Indeed, the 2014 midterm election was the most nationalized election in many decades. Voters who favor a particular party in a presidential election are now much more likely to also support that same party in House and Senate elections than was the case just a few decades ago.