Not surprisingly, the jungle of campaign financing regulations and loopholes is more easily navigated by incumbents in Congress than by newcomers. Incumbents are elected officials who currently hold an office. The amount of money they raise against their challengers demonstrates their advantage. In 2014, for example, the average Senate incumbent raised $12,144,933, whereas the average challenger raised only $1,223,566.

This is one of the many reasons incumbents win a large majority of congressional races each electoral cycle. Incumbents attract more money because people want to give to a winner. In the House, the percentage of incumbents winning reelection has hovered between 85 and 100 percent for the last half century. In the Senate, there is only slightly more variation, given the statewide nature of the race, but it is still a very high majority of incumbents who win reelection. As these rates show, even in the worst political environments, incumbents are very difficult to defeat. 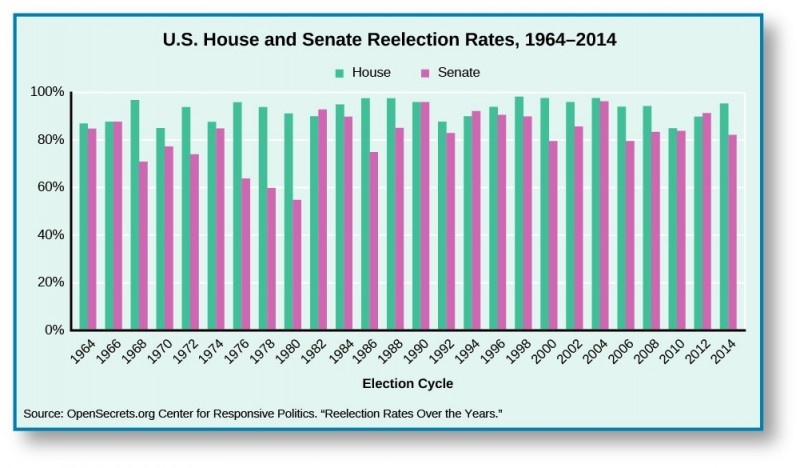 Historically, incumbents in both the House and the Senate enjoy high rates of reelection.

The historical difficulty of unseating an incumbent in the House or Senate is often referred to as the incumbent advantage or the incumbency effect. The advantage in financing is a huge part of this effect, but it is not the only important part. Incumbents often have a much higher level of name recognition. All things being equal, voters are far more likely to select the name of the person they recall seeing on television and hearing on the radio for the last few years than the name of a person they hardly know. And donors are more likely to want to give to a proven winner.

But more important is the way the party system itself privileges incumbents. A large percentage of congressional districts across the country are “safe seats” in uncompetitive districts, meaning candidates from a particular party are highly likely to consistently win the seat. This means the functional decision in these elections occurs during the primary, not in the general election. Political parties in general prefer to support incumbents in elections, because the general consensus is that incumbents are better candidates, and their record of success lends support to this conclusion. That said, while the political parties themselves to a degree control and regulate the primaries, popular individual candidates and challengers sometimes rule the day. This has especially been the case in recent years as conservative incumbents have been “primaried” by challengers more conservative than they.

The End of Incumbency Advantage?

At the start of 2014, House majority whip Eric Cantor, a representative from Virginia, was at the top of his game. He was handsome, popular with talk show hosts and powerful insiders, an impressive campaign fundraiser and speaker, and apparently destined to become Speaker of the House when the current speaker stepped down. Four months later, Cantor lost the opportunity to run for his own congressional seat in a shocking primary election upset that shook the Washington political establishment to its core.

What happened? How did such a powerful incumbent lose a game in which the cards had been stacked so heavily in his favor? Analyses of the stunning defeat quickly showed there were more chinks in Cantor’s polished armor than most wanted to admit. But his weakness wasn’t that he was unable to play the political game. Rather, he may have learned to play it too well. He became seen as too much of a Washington insider.

Cantor’s ambition, political skill, deep connections to political insiders, and ability to come out squeaky clean after even the dirtiest political tussling should have given him a clear advantage over any competitor. But in the political environment of 2014, when conservative voices around the country criticized the party for ignoring the people and catering to political insiders, his strengths became weaknesses. Indeed, Cantor was the only highest-level Republican representative sacrificed to conservative populism.

Were the winds of change blowing for incumbents? Between 1946 and 2012, only 5 percent of incumbent senators and 2 percent of House incumbents lost their party primaries.

In 2014, Cantor was one of four House incumbents who did so, while no incumbent senators suffered defeat. All evidence suggests the incumbent advantage, especially in the primary system, is alive and well. The story of Eric Cantor may very well be the classic case of an exception proving the rule.

If you are a challenger running against an incumbent, what are some strategies you could use to make the race competitive? Would Congress operate differently if challengers defeated incumbents more often?

Another reason incumbents wield a great advantage over their challengers is the state power they have at their disposal. One of the many responsibilities of a sitting congressperson is constituent casework. Constituents routinely reach out to their congressperson for powerful support to solve complex problems, such as applying for and tracking federal benefits or resolving immigration and citizenship challenges.

Incumbent members of Congress have paid staff, influence, and access to specialized information that can help their constituents in ways other persons cannot. And congresspersons are hardly reticent about their efforts to support their constituents. Often, they will publicize their casework on their websites or, in some cases, create television advertisements that boast of their helpfulness. Election history has demonstrated that this form of publicity is very effective in garnering the support of voters.