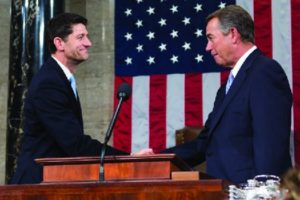 The most expensive House race in 2014 was that of Speaker of the House John Boehner (right), a Republican from Ohio, who spent over $17 million to hold his seat. He later resigned in 2015 and was replaced as Speaker by Paul Ryan (left) of Wisconsin’s 1st District.

Raising this amount of money takes quite a bit of time and effort. Indeed, a presentation for incoming Democratic representatives suggested a daily Washington schedule of five hours reaching out to donors, while only three or four were to be used for actual congressional work. As this advice reveals, raising money for reelection constitutes a large proportion of the work a congressperson does. This has caused many to wonder whether the amount of money in politics has truly become a corrupting influence. However, overall, the lion’s share of direct campaign contributions in congressional elections comes from individual donors, who are less influential than the political action committees (PACs) that contribute the remainder.

Nevertheless, the complex problem of funding campaigns has a long history in the United States. For nearly the first hundred years of the republic, there were no federal campaign finance laws. Then, between the late nineteenth century and the start of World War I, Congress pushed through a flurry of reforms intended to bring order to the world of campaign finance. These laws made it illegal for politicians to solicit contributions from civil service workers, made corporate contributions illegal, and required candidates to report their fundraising. As politicians and donors soon discovered, however, these laws were full of loopholes and were easily skirted by those who knew the ins and outs of the system.

Another handful of reform attempts were therefore pushed through in the wake of World War II, but then Congress neglected campaign finance reform for a few decades. That lull ended in the early 1970s when the Federal Election Campaign Act was passed. Among other things, it created the Federal Election Commission (FEC), required candidates to disclose where their money was coming from and where they were spending it, limited individual contributions, and provided for public financing of presidential campaigns.

Another important reform occurred in 2002, when Senators John McCain (R-AZ) and Russell Feingold (D-WI) drafted, and Congress passed, the Bipartisan Campaign Reform Act (BCRA), also referred to as the McCain-Feingold Act. The purpose of this law was to limit the use of “soft money,” which is raised for purposes like party-building efforts, get-out-the-vote efforts, and issue-advocacy ads. Unlike “hard money” contributed directly to a candidate, which is heavily regulated and limited, soft money had almost no regulations or limits. It had never been a problem before the mid-1990s, when a number of very imaginative political operatives developed a great many ways to spend this money. After that, soft-money donations skyrocketed. But the McCain-Feingold bill greatly limited this type of fundraising.

McCain-Feingold placed limits on total contributions to political parties, prohibited coordination between candidates and PAC campaigns, and required candidates to include personal endorsements on their political ads. Until 2010, it also limited advertisements run by unions and corporations thirty days before a primary and sixty days before a general election.

The FEC’s enforcement of the law spurred numerous court cases challenging it. The most controversial decision was handed down by the Supreme Court in 2010, whose ruling on Citizens United v. Federal Election Commission led to the removal of spending limits on corporations. Justices in the majority argued that the BCRA violated a corporation’s free-speech rights.

The Citizens United case began as a lawsuit against the FEC filed by Citizens United, a nonprofit organization that wanted to advertise a documentary critical of former senator and Democratic hopeful Hillary Clinton on the eve of the 2008 Democratic primaries. Advertising or showing the film during this time window was prohibited by the McCain-Feingold Act. But the Court found that this type of restriction violated the organization’s First Amendment right to free speech. As critics of the decision predicted at the time, the Court thus opened the floodgates to private soft money flowing into campaigns again.

In the wake of the Citizens United decision, a new type of advocacy group emerged, the super PAC. A traditional PAC is an organization designed to raise hard money to elect or defeat candidates. Such PACs tended to be run by businesses and other groups, like the Teamsters Union and the National Rifle Association, to support their special interests. They are highly regulated in regard to the amount of money they can take in and spend, but super PACs aren’t bound by these regulations. While they cannot give money directly to a candidate or a candidate’s party, they can raise and spend unlimited funds, and they can spend independently of a campaign or party. In the 2012 election cycle, for example, super PACs spent just over $600 million dollars and raised about $200 million more.

The amounts are adjusted every two years, based on inflation. These limits are intended to create a more equal playing field for the candidates, so that candidates must raise their campaign funds from a broad pool of contributors.

The Federal Election Commission has strict federal election guidelines on who can contribute, to whom, and how much.

The Center for Responsive Politics reports donation amounts that are required by law to be disclosed to the Federal Elections Commission. One finding is that, counter to conventional wisdom, the vast majority of direct campaign contributions come from individual donors, not from PACs and political parties.