The concept of collective representation describes the relationship between Congress and the United States as a whole. That is, it considers whether the institution itself represents the American people, not just whether a particular member of Congress represents his or her district. Predictably, it is far more difficult for Congress to maintain a level of collective representation than it is for individual members of Congress to represent their own constituents. Not only is Congress a mixture of different ideologies, interests, and party affiliations, but the collective constituency of the United States has an even-greater level of diversity. Nor is it a solution to attempt to match the diversity of opinions and interests in the United States with those in Congress. Indeed, such an attempt would likely make it more difficult for Congress to maintain collective representation. Its rules and procedures require Congress to use flexibility, bargaining, and concessions. Yet, it is this flexibility and these concessions, which many now interpret as corruption, that tend to engender the high public disapproval ratings experienced by Congress.

After many years of deadlocks and bickering on Capitol Hill, the national perception of Congress is near an all-time low. According to Gallup polls, Congress has a stunningly poor approval rating of about 16 percent. This is unusual even for a body that has rarely enjoyed a high approval rating. For example, for nearly two decades following the Watergate scandal in the early 1970s, the national approval rating of Congress hovered between 30 and 40 percent. Yet, incumbent reelections have remained largely unaffected. The reason has to do with the remarkable ability of many in the United States to separate their distaste for Congress from their appreciation for their own representative. Paradoxically, this tendency to hate the group but love one’s own representative actually perpetuates the problem of poor congressional approval ratings. The reason is that it blunts voters’ natural desire to replace those in power who are earning such low approval ratings.

As decades of polling indicate, few events push congressional approval ratings above 50 percent. Indeed, when the ratings are graphed, the two noticeable peaks are at 57 percent in 1998 and 84 percent in 2001. In 1998, according to Gallup polling, the rise in approval accompanied a similar rise in other mood measures, including President Bill Clinton’s approval ratings and general satisfaction with the state of the country and the economy. In 2001, approval spiked after the September 11 terrorist attacks and the Bush administration launched the “War on Terror,” sending troops first to Afghanistan and later to Iraq. War has the power to bring majorities of voters to view their Congress and president in an overwhelmingly positive way. 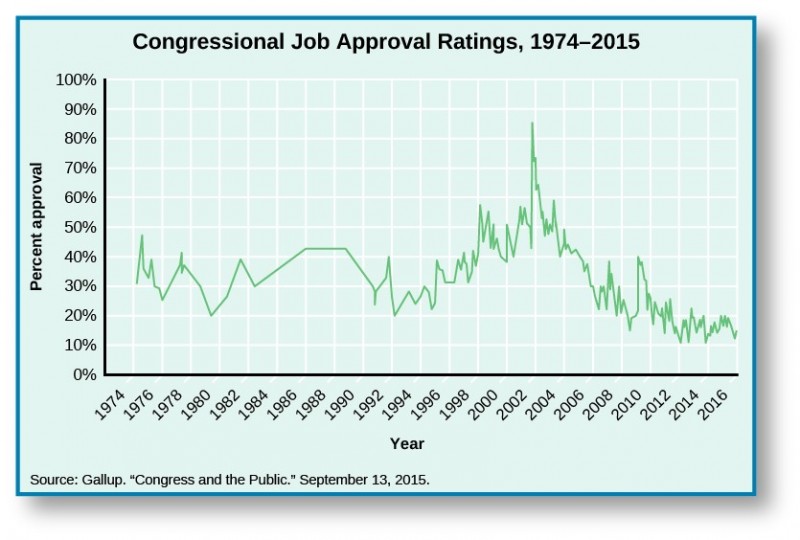 Congress’s job approval rating reached a high of 84 percent in October 2001 following the 9/11 terrorist attacks. It has declined fairly steadily ever since, reaching a low of 9 percent in November 2013, just after the federal government shutdown in the previous month.

Nevertheless, all things being equal, citizens tend to rate Congress more highly when things get done and more poorly when things do not get done. For example, during the first half of President Obama’s first term, Congress’s approval rating reached a relative high of about 40 percent. Both houses were dominated by members of the president’s own party, and many people were eager for Congress to take action to end the deep recession and begin to repair the economy. Millions were suffering economically, out of work, or losing their jobs, and the idea that Congress was busy passing large stimulus packages, working on finance reform, and grilling unpopular bank CEOs and financial titans appealed to many. Approval began to fade as the Republican Party slowed the wheels of Congress during the tumultuous debates over Obamacare and reached a low of 9 percent following the federal government shutdown in October 2013.

One of the events that began the approval rating’s downward trend was Congress’s divisive debate over national deficits. A deficit is what results when Congress spends more than it has available. It then conducts additional deficit spending by increasing the national debt. Many modern economists contend that during periods of economic decline, the nation should run deficits, because additional government spending has a stimulative effect that can help restart a sluggish economy. Despite this benefit, voters rarely appreciate deficits. They see Congress as spending wastefully during a time when they themselves are cutting costs to get by.

The disconnect between the common public perception of running a deficit and its legitimate policy goals is frequently exploited for political advantage. For example, while running for the presidency in 2008, Barack Obama slammed the deficit spending of the George W. Bush presidency, saying it was “unpatriotic.” This sentiment echoed complaints Democrats had been issuing for years as a weapon against President Bush’s policies. Following the election of President Obama and the Democratic takeover of the Senate, the concern over deficit spending shifted parties, with Republicans championing a spendthrift policy as a way of resisting Democratic policies.