Government » American Civil Liberties and Rights » The Rights of Suspects

Once someone has been charged with a crime and indicted, the next stage in a criminal case is typically the trial itself, unless a plea bargain is reached. The Sixth Amendment contains the provisions that govern criminal trials; in full, it states:

“In all criminal prosecutions, the accused shall enjoy the right to a speedy and public trial, by an impartial jury of the State and district wherein the crime shall have been committed, which district shall have been previously ascertained by law, and to be informed of the nature and cause of the accusation; to be confronted with the witnesses against him; to have compulsory process for obtaining witnesses in his favor, and to have the Assistance of Counsel for his defence [sic].”

The first of these guarantees is the right to have a speedy, public trial by an impartial jury. Although there is no absolute limit on the length of time that may pass between an indictment and a trial, the Supreme Court has said that excessively lengthy delays must be justified and balanced against the potential harm to the defendant. In effect, the speedy trial requirement protects people from being detained indefinitely by the government. Yet the courts have ruled that there are exceptions to the public trial requirement; if a public trial would undermine the defendant’s right to a fair trial, it can be held behind closed doors, while prosecutors can request closed proceedings only in certain, narrow circumstances (generally, to protect witnesses from retaliation or to guard classified information). In general, a prosecution must also be made in the “state and district” where the crime was committed; however, people accused of crimes may ask for a change of venue for their trial if they believe pre-trial publicity or other factors make it difficult or impossible for them to receive a fair trial where the crime occurred.

Although the Supreme Court’s proceedings are not televised and there is no video of the courtroom, audio recordings of the oral arguments and decisions announced in cases have been made since 1955. A complete collection of these recordings can be found at the Oyez Project website along with full information about each case.

Most people accused of crimes decline their right to a jury trial. This choice is typically the result of a plea bargain, an agreement between the defendant and the prosecutor in which the defendant pleads guilty to the charge(s) in question, or perhaps to less serious charges, in exchange for more lenient punishment than he or she might receive if convicted after a full trial. There are a number of reasons why this might happen. The evidence against the accused may be so overwhelming that conviction is a near-certainty, so he or she might decide that avoiding the more serious penalty (perhaps even the death penalty) is better than taking the small chance of being acquitted after a trial. Someone accused of being part of a larger crime or criminal organization might agree to testify against others in exchange for lighter punishment. At the same time, prosecutors might want to ensure a win in a case that might not hold up in court by securing convictions for offenses they know they can prove, while avoiding a lengthy trial on other charges they might lose.

The requirement that a jury be impartial is a critical requirement of the Sixth Amendment. Both the prosecution and the defense are permitted to reject potential jurors who they believe are unable to fairly decide the case without prejudice. However, the courts have also said that the composition of the jury as a whole may in itself be prejudicial; potential jurors may not be excluded simply because of their race or sex, for example.

The Sixth Amendment guarantees the right of those accused of crimes to present witnesses in their own defense (if necessary, compelling them to testify) and to confront and cross-examine witnesses presented by the prosecution. In general, the only testimony acceptable in a criminal trial must be given in a courtroom and be subject to cross-examination; hearsay, or testimony by one person about what another person has said, is generally inadmissible, although hearsay may be presented as evidence when it is an admission of guilt by the defendant or a “dying declaration” by a person who has passed away. Although both sides in a trial have the opportunity to examine and cross-examine witnesses, the judge may exclude testimony deemed irrelevant or prejudicial.

Finally, the Sixth Amendment guarantees the right of those accused of crimes to have the assistance of an attorney in their defense. Historically, many states did not provide attorneys to those accused of most crimes who could not afford one themselves; even when an attorney was provided, his or her assistance was often inadequate at best. This situation changed as a result of the Supreme Court’s decision in Gideon v. Wainwright (1963).

Clarence Gideon, a poor drifter, was accused of breaking into and stealing money and other items from a pool hall in Panama City, Florida. Denied a lawyer, Gideon was tried and convicted and sentenced to a five-year prison term. While in prison—still without assistance of a lawyer—he drafted a handwritten appeal and sent it to the Supreme Court, which agreed to hear his case. The justices unanimously ruled that Gideon, and anyone else accused of a serious crime, was entitled to the assistance of a lawyer, even if they could not afford one, as part of the general due process right to a fair trial. 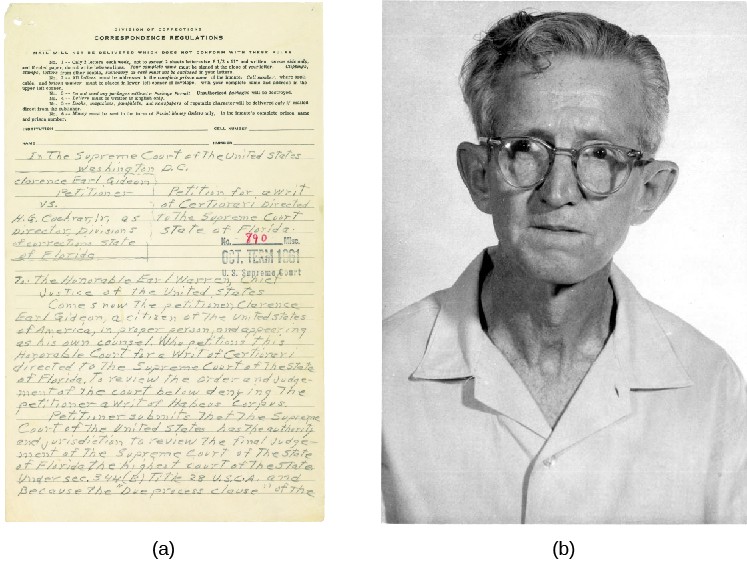 The handwritten petition for appeal (a) sent to the Supreme Court by Clarence Gideon, shown here circa 1961 (b), the year of his Florida arrest for breaking and entering.

The Supreme Court later extended the Gideon v. Wainwright ruling to apply to any case in which an accused person faced the possibility of “loss of liberty,” even for one day. The courts have also overturned convictions in which people had incompetent or ineffective lawyers through no fault of their own. The Gideon ruling has led to an increased need for professional public defenders, lawyers who are paid by the government to represent those who cannot afford an attorney themselves, although some states instead require practicing lawyers to represent poor defendants on a pro bono basis (essentially, donating their time and energy to the case).

The National Association for Public Defense represents public defenders, lobbying for better funding for public defense and improvements in the justice system in general.

Typically a person charged with a serious crime will have a brief hearing before a judge to be informed of the charges against him or her, to be made aware of the right to counsel, and to enter a plea. Other hearings may be held to decide on the admissibility of evidence seized or otherwise obtained by prosecutors.

If the two sides cannot agree on a plea bargain during this period, the next stage is the selection of a jury. A pool of potential jurors is summoned to the court and screened for impartiality, with the goal of seating twelve (in most states) and one or two alternates. All hear the evidence in the trial; unless an alternate must serve, the original twelve decide whether the evidence overwhelmingly points toward guilt or innocence beyond a reasonable doubt.

In the trial itself, the lawyers for the prosecution and defense make opening arguments, followed by testimony by witnesses for the prosecution (and any cross-examination), and then testimony by witnesses for the defense, including the defendant if he or she chooses. Additional prosecution witnesses may be called to rebut testimony by the defense. Finally, both sides make closing arguments. The judge then issues instructions to the jury, including an admonition not to discuss the case with anyone outside the jury room. The jury members leave the courtroom to enter the jury room and begin their deliberations. 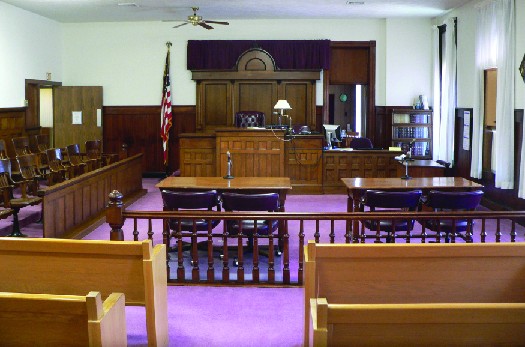 A typical courtroom in the United States. The jury sits along one side, between the judge/witness stand and the tables for the defense and prosecution.

The jurors pick a foreman or forewoman to coordinate their deliberations. They may ask to review evidence or to hear transcripts of testimony. They deliberate in secret and their decision must be unanimous; if they are unable to agree on a verdict after extensive deliberation, a mistrial may be declared, which in effect requires the prosecution to try the case all over again.

A defendant found not guilty of all charges will be immediately released unless other charges are pending (e.g., the defendant is wanted for a crime in another jurisdiction). If the defendant is found guilty of one or more offenses, the judge will choose an appropriate sentence based on the law and the circumstances; in the federal system, this sentence will typically be based on guidelines that assign point values to various offenses and facts in the case. If the prosecution is pursuing the death penalty, the jury will decide whether the defendant should be subject to capital punishment or life imprisonment.

The reality of court procedure is much less dramatic and exciting than what is typically portrayed in television shows and movies. Nonetheless, most Americans will participate in the legal system at least once in their lives as a witness, juror, or defendant.

Have you or any member of your family served on a jury? If so, was the experience a positive one? Did the trial proceed as expected? If you haven’t served on a jury, is it something you look forward to? Why or why not?