“A well regulated Militia, being necessary to the security of a free State, the right of the people to keep and bear Arms, shall not be infringed.”

But the relative simplicity of its text has not kept it from controversy; arguably, the Second Amendment has become controversial in large part because of its text. Is this amendment merely a protection of the right of the states to organize and arm a “well regulated militia” for civil defense, or is it a protection of a “right of the people” as a whole to individually bear arms?

Before the Civil War, this would have been a nearly meaningless distinction. In most states at that time, white males of military age were considered part of the militia, liable to be called for service to put down rebellions or invasions, and the right “to keep and bear Arms” was considered a common-law right inherited from English law that predated the federal and state constitutions. The Constitution was not seen as a limitation on state power, and since the states expected all able-bodied free men to keep arms as a matter of course, what gun control there was mostly revolved around ensuring slaves (and their abolitionist allies) didn’t have guns.

With the beginning of selective incorporation after the Civil War, debates over the Second Amendment were reinvigorated. In the meantime, as part of their black codes designed to reintroduce most of the trappings of slavery, several southern states adopted laws that restricted the carrying and ownership of weapons by former slaves. Despite acknowledging a common-law individual right to keep and bear arms, in 1876 the Supreme Court declined, in United States v. Cruickshank, to intervene to ensure the states would respect it.

In the following decades, states gradually began to introduce laws to regulate gun ownership. Federal gun control laws began to be introduced in the 1930s in response to organized crime, with stricter laws that regulated most commerce and trade in guns coming into force in the wake of the street protests of the 1960s. In the early 1980s, following an assassination attempt on President Ronald Reagan, laws requiring background checks for prospective gun buyers were passed. During this period, the Supreme Court’s decisions regarding the meaning of the Second Amendment were ambiguous at best. In United States v. Miller, the Supreme Court upheld the 1934 National Firearms Act’s prohibition of sawed-off shotguns, largely on the basis that possession of such a gun was not related to the goal of promoting a “well regulated militia.”

This finding was generally interpreted as meaning that the Second Amendment protected the right of the states to organize a militia, rather than an individual right, and thus lower courts generally found most firearm regulations—including some city and state laws that virtually outlawed the private ownership of firearms—to be constitutional.

However, in 2008, in a narrow 5–4 decision on District of Columbia v. Heller, the Supreme Court found that at least some gun control laws did violate the Second Amendment and that this amendment does protect an individual’s right to keep and bear arms, at least in some circumstances—in particular, “for traditionally lawful purposes, such as self-defense within the home.”

Because the District of Columbia is not a state, this decision immediately applied the right only to the federal government and territorial governments. Two years later, in McDonald v. Chicago, the Supreme Court overturned the Cruickshank decision (5–4) and again found that the right to bear arms was a fundamental right incorporated against the states, meaning that state regulation of firearms might, in some circumstances, be unconstitutional. In 2015, however, the Supreme Court allowed several of San Francisco’s strict gun control laws to remain in place, suggesting that—as in the case of rights protected by the First Amendment—the courts will not treat gun rights as absolute. 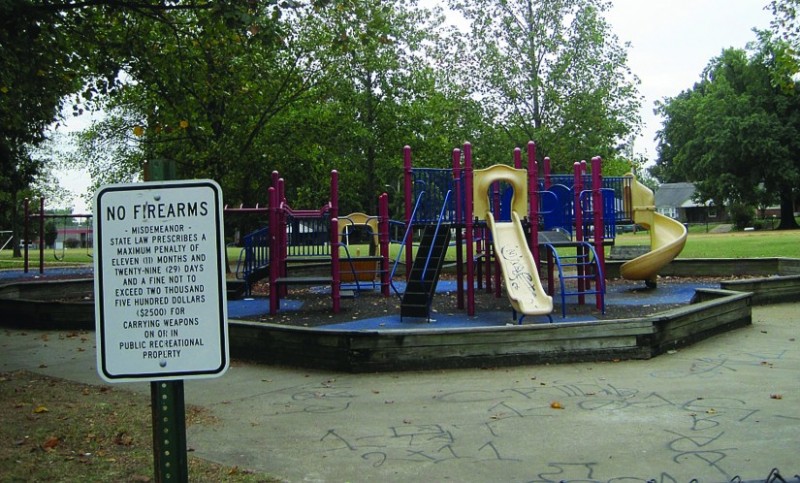 A “No Firearms” sign is posted at Binghamton Park in Memphis, Tennessee, demonstrating that the right to possess a gun is not absolute. (credit: modification of work by Thomas R Machnitzki)