The Fight For Native American Rights

The Fight for Native American Rights

As Indians were removed from their tribal lands and increasingly saw their traditional cultures being destroyed over the course of the nineteenth century, a movement to protect their rights began to grow. Sarah Winnemucca, member of the Paiute tribe, lectured throughout the east in the 1880s in order to acquaint white audiences with the injustices suffered by the western tribes.

Lakota physician Charles Eastman also worked for Native American rights. In 1924, the Indian Citizenship Act granted citizenship to all Native Americans born after its passage. Native Americans born before the act took effect, who had not already become citizens as a result of the Dawes Severalty Act or service in the army in World War I, had to wait until the Nationality Act of 1940 to become citizens. In 1934, Congress passed the Indian Reorganization Act, which ended the division of reservation land into allotments. It returned to Native American tribes the right to institute self-government on their reservations, write constitutions, and manage their remaining lands and resources. It also provided funds for Native Americans to start their own businesses and attain a college education. 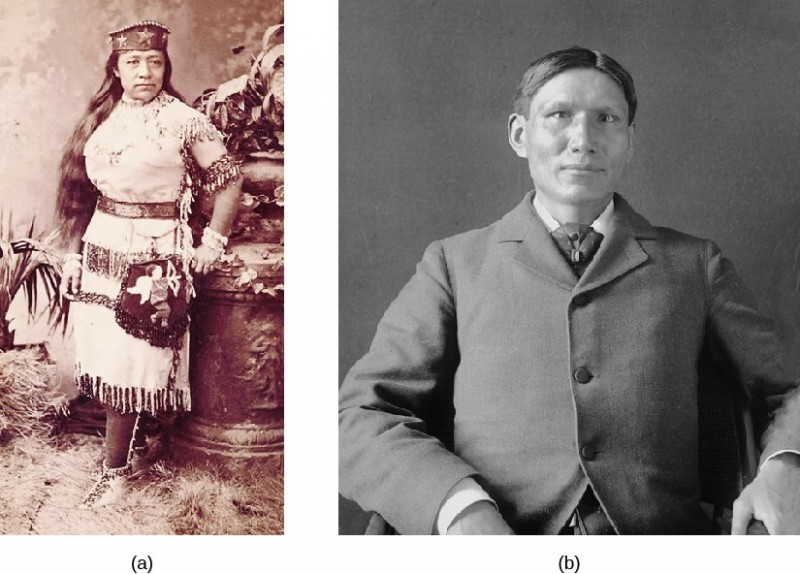 Sarah Winnemucca (a), called the “Paiute Princess” by the press, and Dr. Charles Eastman (b), of the Lakota tribe, campaigned for Native American rights in the late nineteenth and early twentieth centuries. Winnemucca wears traditional dress for a publicity photograph.

Despite the Indian Reorganization Act, conditions on the reservations did not improve dramatically. Most tribes remained impoverished, and many Native Americans, despite the fact that they were now U.S. citizens, were denied the right to vote by the states in which they lived. States justified this violation of the Fifteenth Amendment by claiming that Native Americans might be U.S. citizens but were not state residents because they lived on reservations. Other states denied Native Americans voting rights if they did not pay taxes.

Despite states’ actions, the federal government continued to uphold the rights of tribes to govern themselves. Federal concern for tribal sovereignty was part of an effort on the government’s part to end its control of, and obligations to, Indian tribes.

In the 1960s, a modern Native American civil rights movement, inspired by the African American civil rights movement, began to grow. In 1969, a group of Native American activists from various tribes, part of a new Pan-Indian movement, took control of Alcatraz Island in San Francisco Bay, which had once been the site of a federal prison. Attempting to strike a blow for Red Power, the power of Native Americans united by a Pan-Indian identity and demanding federal recognition of their rights, they maintained control of the island for more than a year and a half. They claimed the land as compensation for the federal government’s violation of numerous treaties and offered to pay for it with beads and trinkets. In January 1970, some of the occupiers began to leave the island. Some may have been disheartened by the accidental death of the daughter of one of the activists. In May 1970, all electricity and telephone service to the island was cut off by the federal government, and more of the occupiers began to leave. In June, the few people remaining on the island were removed by the government. Though the goals of the activists were not achieved, the occupation of Alcatraz had brought national attention to the concerns of Native American activists.

In 1973, members of the American Indian Movement (AIM), a more radical group than the occupiers of Alcatraz, temporarily took over the offices of the Bureau of Indian Affairs in Washington, DC. The following year, members of AIM and some two hundred Oglala Lakota supporters occupied the town of Wounded Knee on the Lakota tribe’s Pine Ridge Reservation in South Dakota, the site of an 1890 massacre of Lakota men, women, and children by the U.S. Army. Many of the Oglala were protesting the actions of their half-white tribal chieftain, who they claimed had worked too closely with the BIA. The occupiers also wished to protest the failure of the Justice Department to investigate acts of white violence against Lakota tribal members outside the bounds of the reservation.

The occupation led to a confrontation between the Native American protestors and the FBI and U.S. Marshals. Violence erupted; two Native American activists were killed, and a marshal was shot. After the second death, the Lakota called for an end to the occupation and negotiations began with the federal government. Two of AIM’s leaders, Russell Means and Dennis Banks, were arrested, but the case against them was later dismissed.

Violence continued on the Pine Ridge Reservation for several years after the siege; the reservation had the highest per capita murder rate in the United States. Two FBI agents were among those who were killed. The Oglala blamed the continuing violence on the federal government. 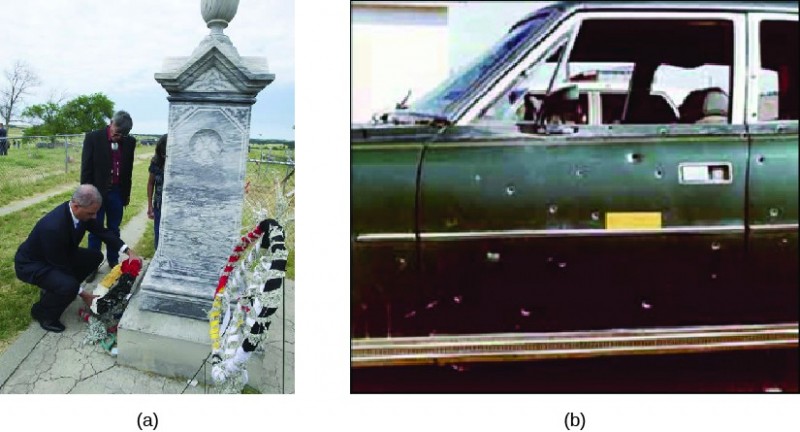 A memorial stone (a) marks the spot of the mass grave of the Lakotas killed in the 1890 massacre at Wounded Knee. The bullet-riddled car (b) of FBI agent Ronald Williams reveals the level of violence reached during—and for years after—the 1973 occupation of the town.

The official website of the American Indian Movement provides information about ongoing issues in Native American communities in both North and South America.

The current relationship between the U.S. government and Native American tribes was established by the Indian Self-Determination and Education Assistance Act of 1975. Under the act, tribes assumed control of programs that had formerly been controlled by the BIA, such as education and resource management, and the federal government provided the funding.

Many tribes have also used their new freedom from government control to legalize gambling and to open casinos on their reservations. Although the states in which these casinos are located have attempted to control gaming on Native American lands, the Supreme Court and the Indian Gaming Regulatory Act of 1988 have limited their ability to do so.

The 1978 American Indian Religious Freedom Act granted tribes the right to conduct traditional ceremonies and rituals, including those that use otherwise prohibited substances like peyote cactus and eagle bones, which can be procured only from vulnerable or protected species.