Government » American Civil Liberties and Rights » The Rights of Suspects

The Eighth Amendment says, in full:

“Excessive bail shall not be required, nor excessive fines imposed, nor cruel and unusual punishments inflicted.”

Bail is a payment of money that allows a person accused of a crime to be freed pending trial; if you “make bail” in a case and do not show up for your trial, you will forfeit the money you paid. Since many people cannot afford to pay bail directly, they may instead get a bail bond, which allows them to pay a fraction of the money (typically 10 percent) to a person who sells bonds and who pays the full bail amount. (In most states, the bond seller makes money because the defendant does not get back the money for the bond, and most people show up for their trials.) However, people believed likely to flee or who represent a risk to the community while free may be denied bail and held in jail until their trial takes place.

It is rare for bail to be successfully challenged for being excessive. The Supreme Court has defined an excessive fine as one “so grossly excessive as to amount to deprivation of property without due process of law” or “grossly disproportional to the gravity of a defendant’s offense.” In practice the courts have rarely struck down fines as excessive either.

The most controversial provision of the Eighth Amendment is the ban on “cruel and unusual punishments.” Various torturous forms of execution common in the past—drawing and quartering, burning people alive, and the like—are prohibited by this provision. Recent controversies over lethal injections and firing squads to administer the death penalty suggest the topic is still salient. While the Supreme Court has never established a definitive test for what constitutes a cruel and unusual punishment, it has generally allowed most penalties short of death for adults, even when to outside observers the punishment might be reasonably seen as disproportionate or excessive.

And, while permitting the death penalty to be applied to murder in some cases, the Supreme Court has generally struck down laws that require the application of the death penalty in certain circumstances. Still, the United States is among ten countries with the most executions worldwide. 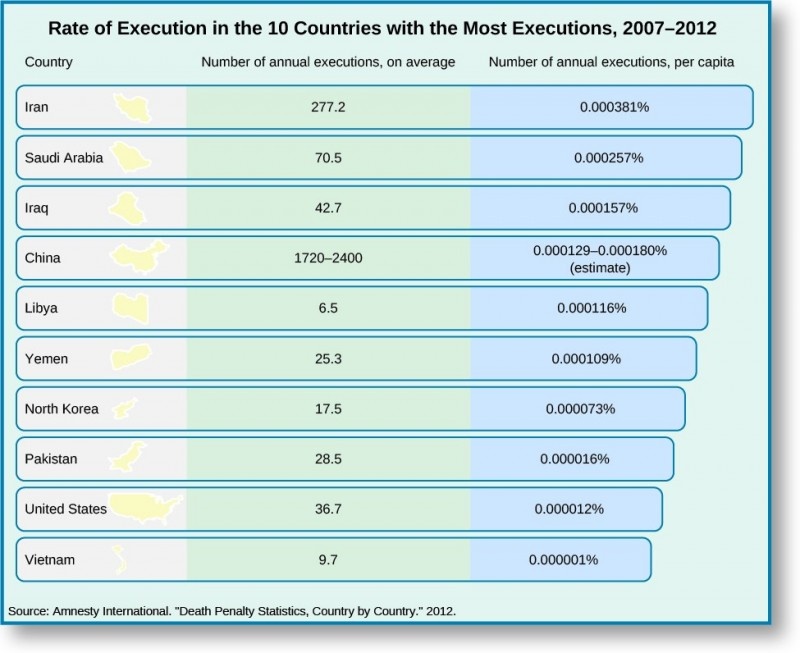 The United States has the ninth highest per capita rate of execution in the world.

At the same time, however, it appears that the public mood may have shifted somewhat against the death penalty, perhaps due in part to an overall decline in violent crime. The reexamination of past cases through DNA evidence has revealed dozens in which people were wrongfully executed. For example, Claude Jones was executed for murder based on 1990-era DNA testing of a single hair that was determined at that time to be his; however, with better DNA testing technology, it was later found to be that of the victim. Perhaps as a result of this and other cases, seven additional states have abolished capital punishment since 2007. As of 2015, nineteen states and the District of Columbia no longer apply the death penalty in new cases, and several other states do not carry out executions despite sentencing people to death. It remains to be seen whether this gradual trend toward the elimination of the death penalty by the states will continue, or whether the Supreme Court will eventually decide to follow former Justice Harry Blackmun’s decision to “no longer… tinker with the machinery of death” and abolish it completely.

The rights of those suspected, accused, and convicted of crimes, along with rights in civil cases and economic liberties, are protected by the second major grouping of amendments within the Bill of Rights. The Fifth Amendment secures various procedural safeguards, protects suspects’ right to remain silent, forbids trying someone twice at the same level of government for the same criminal act, and limits the taking of property for public uses. The Sixth Amendment ensures fairness in criminal trials, including through a fair and speedy trial by an impartial jury, the right to assistance of counsel, and the right to examine and compel testimony from witnesses. The Seventh Amendment ensures the right to jury trials in most civil cases (but only at the federal level). Finally, the Eighth Amendment prohibits excessive fines and bails, as well as “cruel and unusual punishments,” although the scope of what is cruel and unusual is subject to debate.