At the end of the Civil War, the South entered a period called Reconstruction (1865–1877) during which state governments were reorganized before the rebellious states were allowed to be readmitted to the Union. As part of this process, the Republican Party pushed for a permanent end to slavery. A constitutional amendment to this effect was passed by the House of Representatives in January 1865, after having already been approved by the Senate in April 1864, and it was ratified in December 1865 as the Thirteenth Amendment. The amendment’s first section states, “Neither slavery nor involuntary servitude, except as a punishment for crime whereof the party shall have been duly convicted, shall exist within the United States, or any place subject to their jurisdiction.” In effect, this amendment outlawed slavery in the United States.

The changes wrought by the Fourteenth Amendment were more extensive. In addition to introducing the equal protection clause to the Constitution, this amendment also extended the due process clause of the Fifth Amendment to the states, required the states to respect the privileges or immunities of all citizens, and, for the first time, defined citizenship at the national and state levels. People could no longer be excluded from citizenship based solely on their race. Although some of these provisions were rendered mostly toothless by the courts or the lack of political action to enforce them, others were pivotal in the expansion of civil rights.

The Fifteenth Amendment stated that people could not be denied the right to vote based on “race, color, or previous condition of servitude.” This construction allowed states to continue to decide the qualifications of voters as long as those qualifications were ostensibly race-neutral. Thus, while states could not deny African American men the right to vote on the basis of race, they could deny it to women on the basis of sex or to people who could not prove they were literate.

Although the immediate effect of these provisions was quite profound, over time the Republicans in Congress gradually lost interest in pursuing Reconstruction policies, and the Reconstruction ended with the end of military rule in the South and the withdrawal of the Union army in 1877.

Following the army’s removal, political control of the South fell once again into the hands of white men, and violence was used to discourage blacks from exercising the rights they had been granted.

The revocation of voting rights, or disenfranchisement, took a number of forms; not every southern state used the same methods, and some states used more than one, but they all disproportionately affected black voter registration and turnout.

Perhaps the most famous of the tools of disenfranchisement were literacy tests and understanding tests. Literacy tests, which had been used in the North since the 1850s to disqualify naturalized European immigrants from voting, called on the prospective voter to demonstrate his (and later her) ability to read a particular passage of text. However, since voter registration officials had discretion to decide what text the voter was to read, they could give easy passages to voters they wanted to register (typically whites) and more difficult passages to those whose registration they wanted to deny (typically blacks). Understanding tests required the prospective voter to explain the meaning of a particular passage of text, often a provision of the U.S. Constitution, or answer a series of questions related to citizenship. Again, since the official examining the prospective voter could decide which passage or questions to choose, the difficulty of the test might vary dramatically between white and black applicants.

Even had these tests been administered fairly and equitably, however, most blacks would have been at a huge disadvantage, because few could read. Although schools for blacks had existed in some places, southern states had made it largely illegal to teach slaves to read and write. At the beginning of the Civil War, only 5 percent of blacks could read and write, and most of them lived in the North.

Some were able to take advantage of educational opportunities after they were freed, but many were not able to gain effective literacy.

In some states, poorer, less literate white voters feared being disenfranchised by the literacy and understanding tests. Some states introduced a loophole, known as the grandfather clause, to allow less literate whites to vote. The grandfather clause exempted those who had been allowed to vote in that state prior to the Civil War and their descendants from literacy and understanding tests.

Because blacks were not allowed to vote prior to the Civil War, but most white men had been voting at a time when there were no literacy tests, this loophole allowed most illiterate whites to vote while leaving obstacles in place for blacks who wanted to vote as well. Time limits were often placed on these provisions because state legislators realized that they might quickly be declared unconstitutional, but they lasted long enough to allow illiterate white men to register to vote. 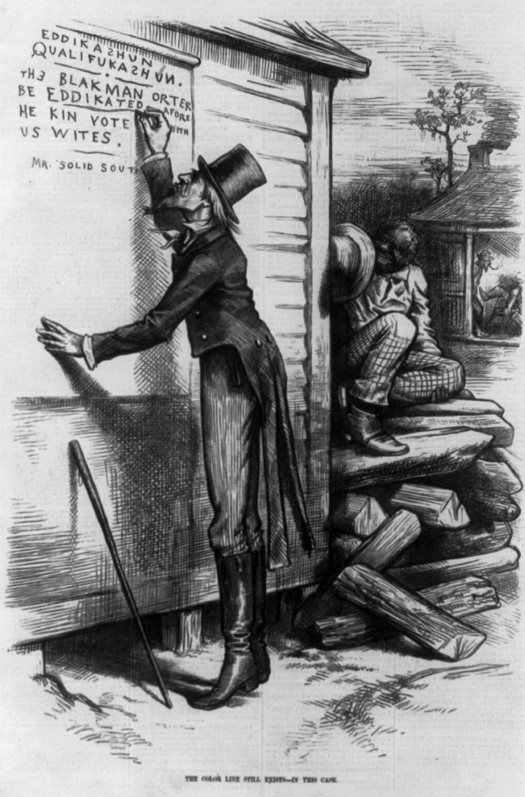 A magazine cartoon from 1879 ridicules the practice of illiterate, southern whites requiring that a “blakman” be “eddikated” before he could vote. The grandfather clause made such a situation possible.

In states where the voting rights of poor whites were less of a concern, another tool for disenfranchisement was the poll tax. This was an annual per-person tax, typically one or two dollars (on the order of $20 to $50 today), that a person had to pay to register to vote. People who didn’t want to vote didn’t have to pay, but in several states the poll tax was cumulative, so if you decided to vote you would have to pay not only the tax due for that year but any poll tax from previous years as well. Because former slaves were usually quite poor, they were less likely than white men to be able to pay poll taxes.

According to this receipt, a man named A. S. White paid his $1 poll tax in Jefferson Parish, Louisiana, in 1917.

Although these methods were usually sufficient to ensure that blacks were kept away from the polls, some dedicated African Americans did manage to register to vote despite the obstacles placed in their way. To ensure their vote was largely meaningless, the white elites used their control of the Democratic Party to create the white primary: primary elections in which only whites were allowed to vote. The state party organizations argued that as private groups, rather than part of the state government, they had no obligation to follow the Fifteenth Amendment’s requirement not to deny the right to vote on the basis of race. Furthermore, they contended, voting for nominees to run for office was not the same as electing those who would actually hold office. So they held primary elections to choose the Democratic nominee in which only white citizens were allowed to vote.

Once the nominee had been chosen, he or she might face token opposition from a Republican or minor-party candidate in the general election, but since white voters had agreed beforehand to support whoever won the Democrats’ primary, the outcome of the general election was a foregone conclusion.

With blacks effectively disenfranchised, the restored southern state governments undermined guarantees of equal treatment in the Fourteenth Amendment. They passed laws that excluded African Americans from juries and allowed the imprisonment and forced labor of “idle” black citizens. The laws also called for segregation of whites and blacks in public places under the doctrine known as “separate but equal.” As long as nominally equal facilities were provided for both whites and blacks, it was legal to require members of each race to use the facilities designated for them. Similarly, state and local governments passed laws limiting what neighborhoods blacks and whites could live in. Collectively, these discriminatory laws came to be known as Jim Crow laws. The Supreme Court upheld the separate but equal doctrine in 1896 in Plessy v. Ferguson, consistent with the Fourteenth Amendment’s equal protection clause, and allowed segregation to continue.