Native Americans Lose Their Land And Their Rights

Native Americans Lose Their Land and Their Rights

From the very beginning of European settlement in North America, Native Americans were abused and exploited. Early British settlers attempted to enslave the members of various tribes, especially in the southern colonies and states.

Following the American Revolution, the U.S. government assumed responsibility for conducting negotiations with Indian tribes, all of which were designated as sovereign nations, and regulating commerce with them. Because Indians were officially regarded as citizens of other nations, they were denied U.S. citizenship.

As white settlement spread westward over the course of the nineteenth century, Indian tribes were forced to move from their homelands. Although the federal government signed numerous treaties guaranteeing Indians the right to live in the places where they had traditionally farmed, hunted, or fished, land-hungry white settlers routinely violated these agreements and the federal government did little to enforce them.

In 1830, Congress passed the Indian Removal Act, which forced Native Americans to move west of the Mississippi River.

Not all tribes were willing to leave their land, however. The Cherokee in particular resisted, and in the 1820s, the state of Georgia tried numerous tactics to force them from their territory. Efforts intensified in 1829 after gold was discovered there. Wishing to remain where they were, the tribe sued the state of Georgia.

In 1831, the Supreme Court decided in Cherokee Nation v. Georgia that Indian tribes were not sovereign nations, but also that tribes were entitled to their ancestral lands and could not be forced to move from them.

The next year, in Worcester v. Georgia, the Court ruled that whites could not enter tribal lands without the tribe’s permission. White Georgians, however, refused to abide by the Court’s decision, and President Andrew Jackson, a former Indian fighter, refused to enforce it.

Between 1831 and 1838, members of several southern tribes, including the Cherokees, were forced by the U.S. Army to move west along routes shown in the map below. The forced removal of the Cherokees to Oklahoma Territory, which had been set aside for settlement by displaced tribes and designated Indian Territory, resulted in the death of one-quarter of the tribe’s population.

The Cherokees remember this journey as the Trail of Tears. 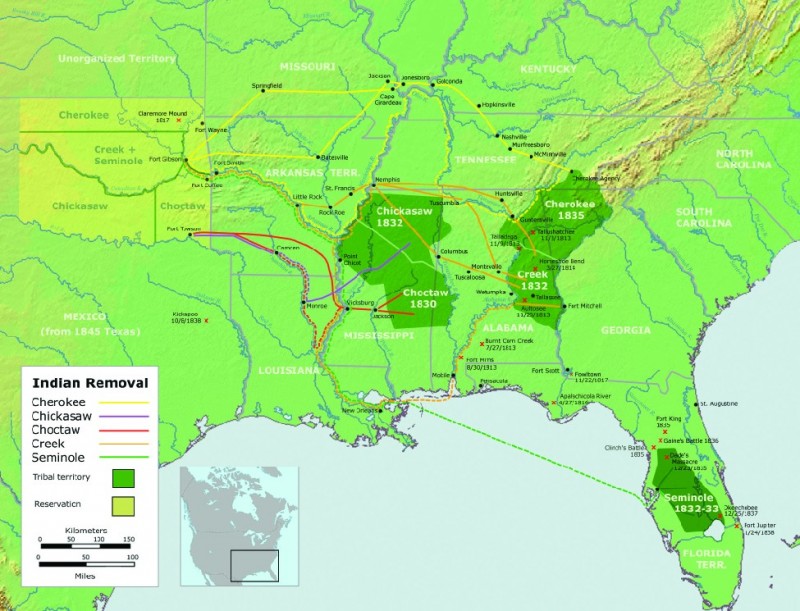 After the passage of the Indian Removal Act, the U.S. military forced the removal of the Cherokee, Chickasaw, Choctaw, Creek, and Seminole from the Southeast to the western territory (present-day Oklahoma), marching them along the routes shown here. The lines in yellow mark the routes taken by the Cherokee on the Trail of Tears.

By the time of the Civil War, most Indian tribes had been relocated west of the Mississippi. However, once large numbers of white Americans and European immigrants had also moved west after the Civil War, Native Americans once again found themselves displaced. They were confined to reservations, which are federal lands set aside for their use where non-Indians could not settle. Reservation land was usually poor, however, and attempts to farm or raise livestock, not traditional occupations for most western tribes anyway, often ended in failure. Unable to feed themselves, the tribes became dependent on the Bureau of Indian Affairs (BIA) in Washington, DC, for support. Protestant missionaries were allowed to “adopt” various tribes, to convert them to Christianity and thus speed their assimilation. In an effort to hasten this process, Indian children were taken from their parents and sent to boarding schools, many of them run by churches, where they were forced to speak English and abandon their traditional cultures.

In 1887, the Dawes Severalty Act, another effort to assimilate Indians to white society, divided reservation lands into individual allotments. Native Americans who accepted these allotments and agreed to sever tribal ties were also given U.S. citizenship. All lands remaining after the division of reservations into allotments were offered for sale by the federal government to white farmers and ranchers. As a result, Indians swiftly lost control of reservation land.

In 1898, the Curtis Act dealt the final blow to Indian sovereignty by abolishing all tribal governments.