Beyond these favorable court rulings, however, progress toward equality for African Americans remained slow in the 1950s. In 1962, Congress proposed what later became the Twenty-Fourth Amendment, which banned the poll tax in elections to federal (but not state or local) office; the amendment went into effect after being ratified in early 1964. Several southern states continued to require residents to pay poll taxes in order to vote in state elections until 1966 when, in the case of Harper v. Virginia Board of Elections, the Supreme Court declared that requiring payment of a poll tax in order to vote in an election at any level was unconstitutional.

The slow rate of progress led to frustration within the African American community. Newer, grassroots organizations such as the Southern Christian Leadership Conference (SCLC), Congress of Racial Equality (CORE), and Student Non-Violent Coordinating Committee (SNCC) challenged the NAACP’s position as the leading civil rights organization and questioned its legal-focused strategy. These newer groups tended to prefer more confrontational approaches, including the use of direct action campaigns relying on marches and demonstrations. The strategies of nonviolent resistance and civil disobedience, or the refusal to obey an unjust law, had been effective in the campaign led by Mahatma Gandhi to liberate colonial India from British rule in the 1930s and 1940s. Civil rights pioneers adopted these measures in the 1955–1956 Montgomery bus boycott. After Rosa Parks refused to give up her bus seat to a white person and was arrested, a group of black women carried out a day-long boycott of Montgomery’s public transit system. This boycott was then extended for over a year and overseen by union organizer E. D. Nixon. The effort desegregated public transportation in that city.

Direct action also took such forms as the sit-in campaigns to desegregate lunch counters that began in Greensboro, North Carolina, in 1960, and the 1961 Freedom Rides in which black and white volunteers rode buses and trains through the South to enforce a 1946 Supreme Court decision that desegregated interstate transportation (Morgan v. Virginia).

While such focused campaigns could be effective, they often had little impact in places where they were not replicated. In addition, some of the campaigns led to violence against both the campaigns’ leaders and ordinary people; Rosa Parks, a longtime NAACP member and graduate of the Highlander Folk School for civil rights activists, whose actions had begun the Montgomery boycott, received death threats, E. D. Nixon’s home was bombed, and the Freedom Riders were attacked in Alabama.

As the campaign for civil rights continued and gained momentum, President John F. Kennedy called for Congress to pass new civil rights legislation, which began to work its way through Congress in 1963. The resulting law (pushed heavily and then signed by President Lyndon B. Johnson after Kennedy’s assassination) was the Civil Rights Act of 1964, which had wide-ranging effects on U.S. society. Not only did the act outlaw government discrimination and the unequal application of voting qualifications by race, but it also, for the first time, outlawed segregation and other forms of discrimination by most businesses that were open to the public, including hotels, theaters, and restaurants that were not private clubs. It outlawed discrimination on the basis of race, ethnicity, religion, sex, or national origin by most employers, and it created the Equal Employment Opportunity Commission (EEOC) to monitor employment discrimination claims and help enforce this provision of the law. The provisions that affected private businesses and employers were legally justified not by the Fourteenth Amendment’s guarantee of equal protection of the laws but instead by Congress’s power to regulate interstate commerce.

Even though the Civil Rights Act of 1964 had a monumental impact over the long term, it did not end efforts by many southern whites to maintain the white-dominated political power structure in the region. Progress in registering African American voters remained slow in many states despite increased federal activity supporting it, so civil rights leaders including Martin Luther King, Jr. decided to draw the public eye to the area where the greatest resistance to voter registration drives were taking place. The SCLC and SNCC particularly focused their attention on the city of Selma, Alabama, which had been the site of violent reactions against civil rights activities.

The organizations’ leaders planned a march from Selma to Montgomery in March 1965. Their first attempt to march was violently broken up by state police and sheriff’s deputies. The second attempt was aborted because King feared it would lead to a brutal confrontation with police and violate a court order from a federal judge who had been sympathetic to the movement in the past. That night, three of the marchers, white ministers from the north, were attacked and beaten with clubs by members of the Ku Klux Klan; one of the victims died from his injuries. Televised images of the brutality against protesters and the death of a minister led to greater public sympathy for the cause. Eventually, a third march was successful in reaching the state capital of Montgomery. 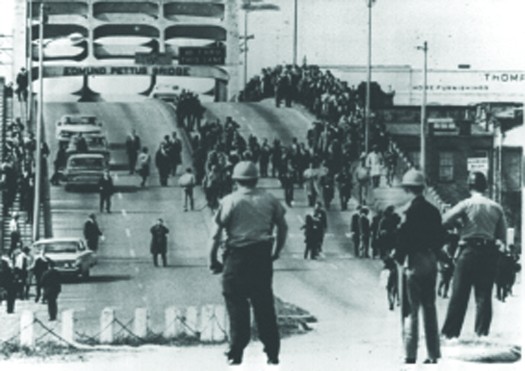 The police attack on civil rights demonstrators as they crossed the Edmund Pettus Bridge on their way from Selma to Montgomery on March 7, 1965, is remembered as “Bloody Sunday.”

The 1987 PBS documentary Eyes on the Prize won several Emmys and other awards for its coverage of major events in the civil rights movement, including the Montgomery bus boycott, the battle for school integration in Little Rock, the march from Selma to Montgomery, and Martin Luther King, Jr.’s leadership of the march on Washington, DC.

The events at Selma galvanized support in Congress for a follow-up bill solely dealing with the right to vote. The Voting Rights Act of 1965 went beyond previous laws by requiring greater oversight of elections by federal officials. Literacy and understanding tests, and other devices used to discriminate against voters on the basis of race, were banned. The Voting Rights Act proved to have much more immediate and dramatic effect than the laws that preceded it; what had been a fairly slow process of improving voter registration and participation was replaced by a rapid increase of black voter registration rates—although white registration rates increased over this period as well.

To many people’s way of thinking, however, the Supreme Court turned back the clocks when it gutted a core aspect of the Voting Rights Act in Shelby County v. Holder (2013).

No longer would states need federal approval to change laws and policies related to voting. Indeed, many states with a history of voter discrimination quickly resumed restrictive practices with laws requiring photo ID and limiting early voting. Some of the new restrictions are already being challenged in the courts.

Not all African Americans in the civil rights movement were comfortable with gradual change. Instead of using marches and demonstrations to change people’s attitudes, calling for tougher civil rights laws, or suing for their rights in court, they favored more immediate action that forced whites to give in to their demands. Men like Malcolm X, the leader of the Nation of Islam, and groups like the Black Panthers were willing to use violence to achieve their goals.

These activists called for Black Power and Black Pride, not assimilation into white society. Their position was attractive to many young African Americans, especially after Martin Luther King, Jr. was assassinated in 1968. 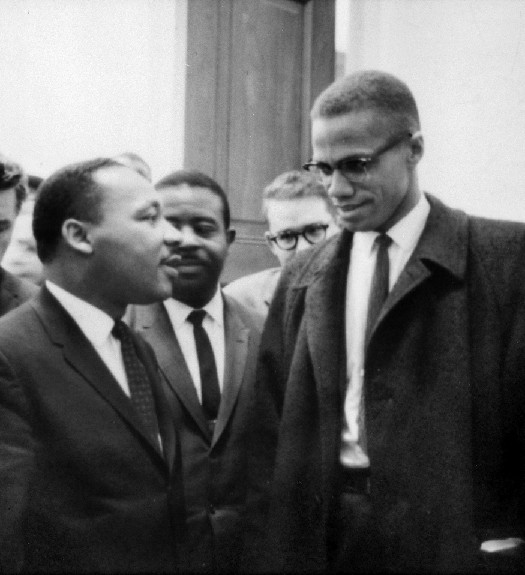 Martin Luther King, Jr. (left) and Malcolm X (right) adopted different approaches to securing civil rights for African Americans. This occasion, a Senate debate of the Civil Rights Act of 1964, was the only time the two men ever met.