Hispanics and Latinos in the United States have faced many of the same problems as African Americans and Native Americans. Although the terms Hispanic and Latino are often used interchangeably, they are not the same. Hispanic usually refers to native speakers of Spanish. Latino refers to people who come from, or whose ancestors came from, Latin America. Not all Hispanics are Latinos. Latinos may be of any race or ethnicity; they may be of European, African, Native American descent, or they may be of mixed ethnic background. Thus, people from Spain are Hispanic but are not Latino.

Many Latinos became part of the U.S. population following the annexation of Texas by the United States in 1845 and of California, Arizona, New Mexico, Nevada, Utah, and Colorado following the War with Mexico in 1848. Most were subject to discrimination and could find employment only as poorly paid migrant farm workers, railroad workers, and unskilled laborers.

The Spanish-speaking population of the United States increased following the Spanish-American War in 1898 with the incorporation of Puerto Rico as a U.S. territory. In 1917, during World War I, the Jones Act granted U.S. citizenship to Puerto Ricans.

When the United States entered World War II, however, Mexicans were invited to immigrate to the United States as farmworkers under the Bracero (bracero meaning “manual laborer” in Spanish) Program to make it possible for these American men to enlist in the armed services.

Mexican Americans and Puerto Ricans did not passively accept discriminatory treatment, however. In 1903, Mexican farmworkers joined with Japanese farmworkers, who were also poorly paid, to form the first union to represent agricultural laborers. In 1929, Latino civil rights activists formed the League of United Latin American Citizens (LULAC) to protest against discrimination and to fight for greater rights for Latinos.

Just as in the case of African Americans, however, true civil rights advances for Hispanics and Latinos did not take place until the end of World War II. Hispanic and Latino activists targeted the same racist practices as did African Americans and used many of the same tactics to end them. In 1946, Mexican American parents in California, with the assistance of the NAACP, sued several California school districts that forced Mexican and Mexican American children to attend segregated schools. In the case of Mendez v. Westminster (1947), the Court of Appeals for the Ninth Circuit Court held that the segregation of Mexican and Mexican American students into separate schools was unconstitutional.

Although Latinos made some civil rights advances in the decades following World War II, discrimination continued. Alarmed by the large number of undocumented Mexicans crossing the border into the United States in the 1950s, the United States government began Operation Wetback (wetback is a derogatory term for Mexicans living unofficially in the United States). From 1953 to 1958, more than three million Mexican immigrants, and some Mexican Americans as well, were deported from California, Texas, and Arizona.

To limit the entry of Hispanic and Latino immigrants to the United States, in 1965 Congress imposed an immigration quota of 120,000 newcomers from the Western Hemisphere.

In March 1968, Chicano students at five high schools in East Los Angeles went on strike to demand better education for students of Mexican ancestry. Los Angeles schools did not allow Latino students to speak Spanish in class and gave no place to study Mexican history in the curriculum. Guidance counselors also encouraged students, regardless of their interests or ability, to pursue vocational careers instead of setting their sights on college. Some students were placed in classes for the mentally challenged even though they were of normal intelligence. As a result, the dropout rate among Mexican American students was very high.

School administrators refused to meet with the student protestors to discuss their grievances. After a week, police were sent in to end the strike. Thirteen of the organizers of the walkout were arrested and charged with conspiracy to disturb the peace. After Sal Castro, a teacher who had led the striking students, was dismissed from his job, activists held a sit-in at school district headquarters until Castro was reinstated. Student protests spread across the Southwest, and in response many schools did change. That same year, Congress passed the Bilingual Education Act, which required school districts with large numbers of Hispanic or Latino students to provide instruction in Spanish.

Bilingual education remains controversial, even among Hispanics and Latinos. What are some arguments they might raise both for and against it? Are these different from arguments coming from whites?

Mexican American civil rights leaders were active in other areas as well. Throughout the 1960s, Cesar Chavez and Dolores Huerta fought for the rights of Mexican American agricultural laborers through their organization, the United Farm Workers (UFW), a union for migrant workers they founded in 1962. Chavez, Huerta, and the UFW proclaimed their solidarity with Filipino farm workers by joining them in a strike against grape growers in Delano, California, in 1965. Chavez consciously adopted the tactics of the African American civil rights movement. In 1965, he called upon all U.S. consumers to boycott California grapes, and in 1966, he led the UFW on a 300-mile march to Sacramento, the state capital, to bring the state farm workers’ problems to the attention of the entire country. The strike finally ended in 1970 when the grape growers agreed to give the pickers better pay and benefits. 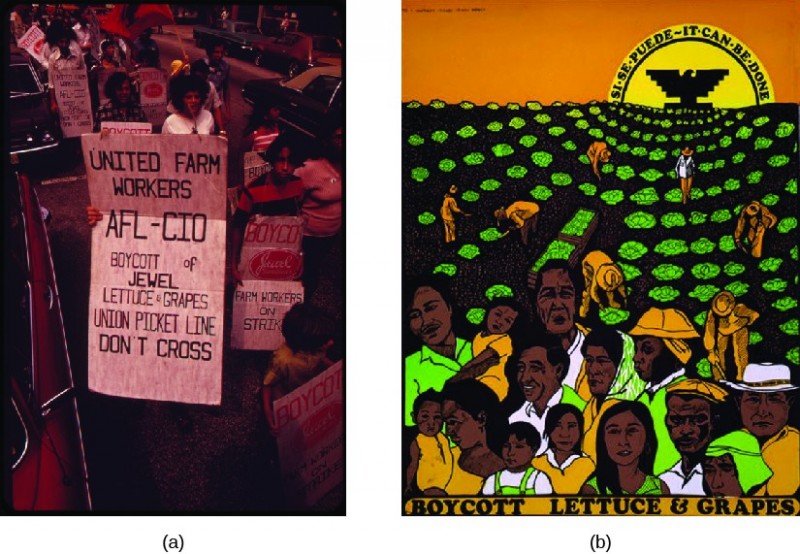 Protestors picket a grocery store in 1973, urging consumers not to buy grapes or lettuce picked by underpaid farm workers (a). The boycott, organized by Cesar Chavez and the United Farm Workers using the slogan “Sí se puede” or “Yes, it can be done!” (b), ultimately forced California growers to improve conditions for migrant laborers.

As Latino immigration to the United States increased in the late twentieth and early twenty-first centuries, discrimination also increased in many places. In 1994, California voters passed Proposition 187. The proposition sought to deny non-emergency health services, food stamps, welfare, and Medicaid to undocumented immigrants. It also banned children from attending public school unless they could present proof that they and their parents were legal residents of the United States. A federal court found it unconstitutional in 1997 on the grounds that the law’s intention was to regulate immigration, a power held only by the federal government.

In 2005, discussion began in Congress on proposed legislation that would make it a felony to enter the United States illegally or to give assistance to anyone who had done so. Although the bill quickly died, on May 1, 2006, hundreds of thousands of people, primarily Latinos, staged public demonstrations in major U.S. cities, refusing to work or attend school for one day.

The protestors claimed that people seeking a better life should not be treated as criminals and that undocumented immigrants already living in the United States should have the opportunity to become citizens.

Following the failure to make undocumented immigration a felony under federal law, several states attempted to impose their own sanctions on illegal immigration. In April 2010, Arizona passed a law that made illegal immigration a state crime. The law also forbade undocumented immigrants from seeking work and allowed law enforcement officers to arrest people suspected of being in the U.S. illegally. Thousands protested the law, claiming that it encouraged racial profiling. In 2012, in Arizona v. United States, the U.S. Supreme Court struck down those provisions of the law that made it a state crime to reside in the United States illegally, forbade undocumented immigrants to take jobs, and allowed the police to arrest those suspected of being illegal immigrants.

The court, however, upheld the authority of the police to ascertain the immigration status of someone suspected of being an undocumented alien if the person had been stopped or arrested by the police for other reasons. Today, Latinos constitute the largest minority group in the United States. They also have one of the highest birth rates of any ethnic group.

Although Hispanics lag behind whites in terms of income and high school graduation rates, they are enrolling in college at higher rates than whites.

Topics that remain at the forefront of public debate today include immigration reform, the DREAM Act (a proposal for granting undocumented immigrants permanent residency in stages), and court action on President Obama’s executive orders on immigration.