To be more precise in their language, political scientists and legal experts make a distinction between civil liberties and civil rights, even though the Constitution has been interpreted to protect both. We typically envision civil liberties as being limitations on government power, intended to protect freedoms that governments may not legally intrude on. For example, the First Amendment denies the government the power to prohibit “the free exercise” of religion; the states and the national government cannot forbid people to follow a religion of their choice, even if politicians and judges think the religion is misguided, blasphemous, or otherwise inappropriate.

You are free to create your own religion and recruit followers to it (subject to the U.S. Supreme Court deeming it a religion), even if both society and government disapprove of its tenets. That said, the way you practice your religion may be regulated if it impinges on the rights of others. Similarly, the Eighth Amendment says the government cannot impose “cruel and unusual punishments” on individuals for their criminal acts. Although the definitions of cruel and unusual have expanded over the years, as we will see later in this chapter, the courts have generally and consistently interpreted this provision as making it unconstitutional for government officials to torture suspects.

Civil rights, on the other hand, are guarantees that government officials will treat people equally and that decisions will be made on the basis of merit rather than race, gender, or other personal characteristics. Because of the Constitution’s civil rights guarantee, it is unlawful for a school or university run by a state government to treat students differently based on their race, ethnicity, age, sex, or national origin. In the 1960s and 1970s, many states had separate schools where only students of a certain race or gender were able to study. However, the courts decided that these policies violated the civil rights of students who could not be admitted because of those rules.[1]

The idea that Americans—indeed, people in general—have fundamental rights and liberties was at the core of the arguments in favor of their independence. In writing the Declaration of Independence in 1776, Thomas Jefferson drew on the ideas of John Locke to express the colonists’ belief that they had certain inalienable or natural rights that no ruler had the power or authority to deny to his or her subjects. It was a scathing legal indictment of King George III for violating the colonists’ liberties. Although the Declaration of Independence does not guarantee specific freedoms, its language was instrumental in inspiring many of the states to adopt protections for civil liberties and rights in their own constitutions, and in expressing principles of the founding era that have resonated in the United States since its independence. In particular, Jefferson’s words “all men are created equal” became the centerpiece of struggles for the rights of women and minorities. 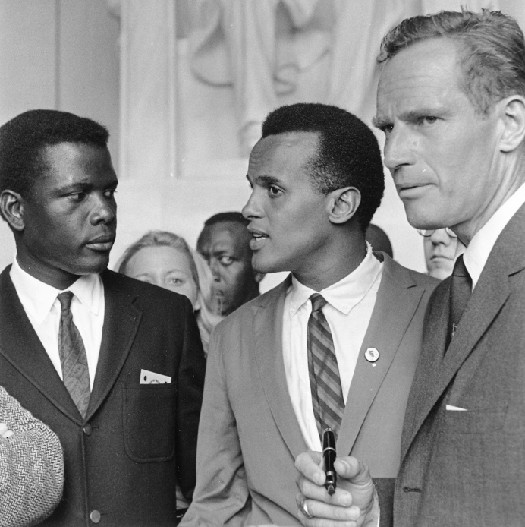 Actors and civil rights activists Sidney Poitier (left), Harry Belafonte (center), and Charlton Heston (right) on the steps of the Lincoln Memorial on August 28, 1963, during the March on Washington.

Founded in 1920, the American Civil Liberties Union (ACLU) is one of the oldest interest groups in the United States. The mission of this non-partisan, not-for-profit organization is “to defend and preserve the individual rights and liberties guaranteed to every person in this country by the Constitution and laws of the United States.” Many of the Supreme Court cases in this chapter were litigated by, or with the support of, the ACLU. The ACLU offers a listing of state and local chapters on their website.