Civil Rights In The Courts

Civil Rights in the Courts

By the turn of the twentieth century, the position of African Americans was quite bleak. Even outside the South, racial inequality was a fact of everyday life. African American leaders and thinkers themselves disagreed on the right path forward. Some, like Booker T. Washington, argued that acceptance of inequality and segregation over the short term would allow African Americans to focus their efforts on improving their educational and social status until whites were forced to acknowledge them as equals. W. E. B. Du Bois, however, argued for a more confrontational approach and in 1909 founded the National Association for the Advancement of Colored People (NAACP) as a rallying point for securing equality. Liberal whites dominated the organization in its early years, but African Americans assumed control over its operations in the 1920s.

The NAACP soon focused on a strategy of overturning Jim Crow laws through the courts. Perhaps its greatest series of legal successes consisted of its efforts to challenge segregation in education. Early cases brought by the NAACP dealt with racial discrimination in higher education. In 1938, the Supreme Court essentially gave states a choice: they could either integrate institutions of higher education, or they could establish an equivalent university or college for African Americans.

Southern states chose to establish colleges for blacks rather than allow them into all-white state institutions. Although this ruling expanded opportunities for professional and graduate education in areas such as law and medicine for African Americans by requiring states to provide institutions for them to attend, it nevertheless allowed segregated colleges and universities to continue to exist.

The landmark court decision of the judicial phase of the civil rights movement settled the Brown v. Board of Education case in 1954.

In this case, the Supreme Court unanimously overturned its decision in Plessy v. Ferguson as it pertained to public education, stating that a separate but equal education was a logical impossibility. Even with the same funding and equivalent facilities, a segregated school could not have the same teachers or environment as the equivalent school for another race. The court also rested its decision in part on social science studies suggesting that racial discrimination led to feelings of inferiority among African American children. The only way to dispel this sense of inferiority was to end segregation and integrate public schools.

It is safe to say this ruling was controversial. While integration of public schools took place without much incident in some areas of the South, particularly where there were few black students, elsewhere it was often confrontational—or nonexistent. In recognition of the fact that southern states would delay school integration for as long as possible, civil rights activists urged the federal government to enforce the Supreme Court’s decision. Organized by A. Philip Randolph and Bayard Rustin, approximately twenty-five thousand African Americans gathered in Washington, DC, on May 17, 1957, to participate in a Prayer Pilgrimage for Freedom. 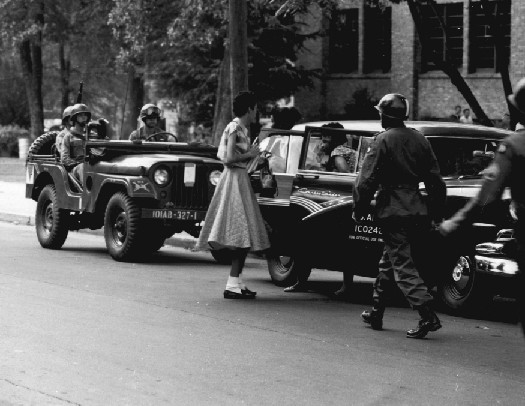 Opposition to the 1957 integration of Little Rock’s all-white Central High School led President Eisenhower to call in soldiers of the 101st Airborne Division. For a year, they escorted nine African American students to and from school and to and from classes within the school. (credit: The U.S. Army)

In Virginia, state leaders employed a strategy of “massive resistance” to school integration, which led to the closure of a large number of public schools across the state, some for years.

Although de jure segregation, segregation mandated by law, had ended on paper, in practice, few efforts were made to integrate schools in most school districts with substantial black student populations until the late 1960s. Many white southerners who objected to sending their children to school with blacks then established private academies that admitted only white students.

Advances were made in the courts in areas other than public education. In many neighborhoods in northern cities, which technically were not segregated, residents were required to sign restrictive real estate covenants promising that if they moved, they would not sell their houses to African Americans and sometimes not to Chinese, Japanese, Mexicans, Filipinos, Jews, and other ethnic minorities as well.

In the case of Shelley v. Kraemer (1948), the Supreme Court held that while such covenants did not violate the Fourteenth Amendment because they consisted of agreements between private citizens, their provisions could not be enforced by courts.

Because state courts are government institutions and the Fourteenth Amendment prohibits the government from denying people equal protection of the law, the courts’ enforcement of such covenants would be a violation of the amendment. Thus, if a white family chose to sell its house to a black family and the other homeowners in the neighborhood tried to sue the seller, the court would not hear the case. In 1967, the Supreme Court struck down a Virginia law that prohibited interracial marriage in Loving v. Virginia.