Just as the passage of the Thirteenth, Fourteenth, and Fifteenth Amendments did not result in equality for African Americans, the Nineteenth Amendment did not end discrimination against women in education, employment, or other areas of life, which continued to be legal. Although women could vote, they very rarely ran for or held public office. Women continued to be underrepresented in the professions, and relatively few sought advanced degrees. Until the mid-twentieth century, the ideal in U.S. society was typically for women to marry, have children, and become housewives. Those who sought work for pay outside the home were routinely denied jobs because of their sex and, when they did find employment, were paid less than men. Women who wished to remain childless or limit the number of children they had in order to work or attend college found it difficult to do so. In some states it was illegal to sell contraceptive devices, and abortions were largely illegal and difficult for women to obtain.

A second women’s rights movement emerged in the 1960s to address these problems. Title VII of the Civil Rights Act of 1964 prohibited discrimination in employment on the basis of sex as well as race, color, national origin, and religion. Nevertheless, women continued to be denied jobs because of their sex and were often sexually harassed at the workplace. In 1966, feminists who were angered by the lack of progress made by women and by the government’s lackluster enforcement of Title VII organized the National Organization for Women (NOW). NOW promoted workplace equality, including equal pay for women, and also called for the greater presence of women in public office, the professions, and graduate and professional degree programs.

NOW also declared its support for the Equal Rights Amendment (ERA), which mandated equal treatment for all regardless of sex. The ERA, written by Alice Paul and Crystal Eastman, was first proposed to Congress, unsuccessfully, in 1923. It was introduced in every Congress thereafter but did not pass both the House and the Senate until 1972. The amendment was then sent to the states for ratification with a deadline of March 22, 1979. Although many states ratified the amendment in 1972 and 1973, the ERA still lacked sufficient support as the deadline drew near. Opponents, including both women and men, argued that passage would subject women to military conscription and deny them alimony and custody of their children should they divorce.

In 1978, Congress voted to extend the deadline for ratification to June 30, 1982. Even with the extension, however, the amendment failed to receive the support of the required thirty-eight states; by the time the deadline arrived, it had been ratified by only thirty-five, some of those had rescinded their ratifications, and no new state had ratified the ERA during the extension period. 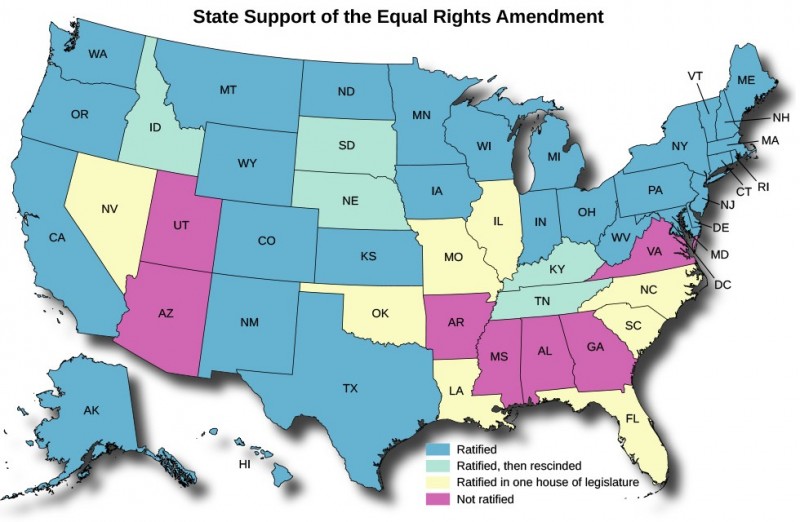 The map shows which states supported the ERA and which did not. The dark blue states ratified the amendment. The amendment was ratified but later rescinded in the light blue states and was ratified in only one branch of the legislature in the yellow states. The ERA was never ratified by the purple states.

Although the ERA failed to be ratified, Title IX of the United States Education Amendments of 1972 passed into law as a federal statute (not as an amendment, as the ERA was meant to be). Title IX applies to all educational institutions that receive federal aid and prohibits discrimination on the basis of sex in academic programs, dormitory space, health-care access, and school activities including sports. Thus, if a school receives federal aid, it cannot spend more funds on programs for men than on programs for women.