Because Asian Americans are often stereotypically regarded as “the model minority” (because it is assumed they are generally financially successful and do well academically), it is easy to forget that they have also often been discriminated against and denied their civil rights. Indeed, in the nineteenth century, Asians were among the most despised of all immigrant groups and were often subjected to the same laws enforcing segregation and forbidding interracial marriage as were African Americans and American Indians.

The Chinese were the first large group of Asians to immigrate to the United States. They arrived in large numbers in the mid-nineteenth century to work in the mining industry and on the Central Pacific Railroad. Others worked as servants or cooks or operated laundries. Their willingness to work for less money than whites led white workers in California to call for a ban on Chinese immigration. In 1882, Congress passed the Chinese Exclusion Act, which prevented Chinese from immigrating to the United States for ten years and prevented Chinese already in the country from becoming citizens. In 1892, the Geary Act extended the ban on Chinese immigration for another ten years. In 1913, California passed a law preventing all Asians, not just the Chinese, from owning land. With the passage of the Immigration Act of 1924, all Asians, with the exception of Filipinos, were prevented from immigrating to the United States or becoming naturalized citizens. Laws in several states barred marriage between Chinese and white Americans, and some cities with large Asian populations required Asian children to attend segregated schools. 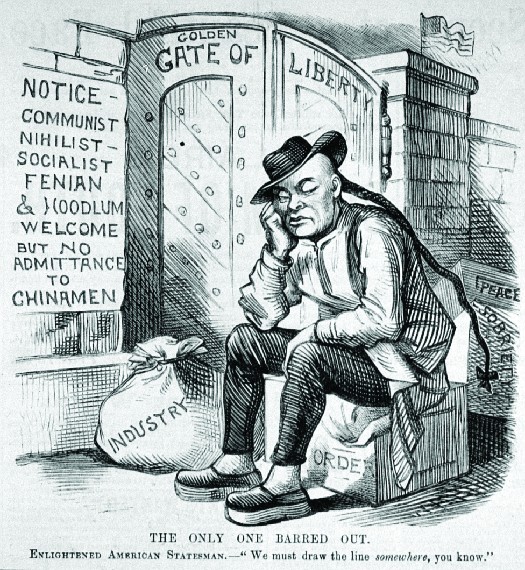 The cartoon shows a Chinese laborer, the personification of industry and sobriety, outside the “Golden Gate of Liberty.” The Chinese Exclusion Act of 1882 has barred him from entering the country, while communists and “hoodlums” are allowed in.

During World War II, citizens of Japanese descent living on the West Coast, whether naturalized immigrants or Japanese Americans born in the United States, were subjected to the indignity of being removed from their communities and interned under Executive Order 9066. The reason was fear that they might prove disloyal to the United States and give assistance to Japan. Although Italians and Germans suspected of disloyalty were also interned by the U.S. government, only the Japanese were imprisoned solely on the basis of their ethnicity. None of the more than 110,000 Japanese and Japanese Americans internees was ever found to have committed a disloyal act against the United States, and many young Japanese American men served in the U.S. army during the war.

Although Japanese American Fred Korematsu challenged the right of the government to imprison law-abiding citizens, the Supreme Court decision in the 1944 case of Korematsu v. United States upheld the actions of the government as a necessary precaution in a time of war.

When internees returned from the camps after the war was over, many of them discovered that the houses, cars, and businesses they had left behind, often in the care of white neighbors, had been sold or destroyed. 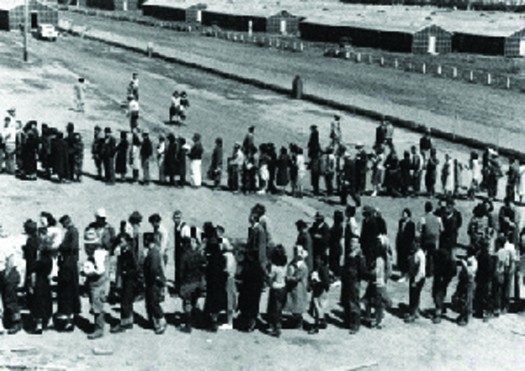 Japanese Americans displaced from their homes by the U.S. government during World War II stand in line outside the mess hall at a relocation center in San Bruno, California, on April 29, 1942.

In 1974, in the case of Lau v. Nichols, Chinese American students in San Francisco sued the school district, claiming its failure to provide them with assistance in learning English denied them equal educational opportunities.

The Supreme Court found in favor of the students.

The Asian American movement is no longer as active as other civil rights movements are. Although discrimination persists, Americans of Asian ancestry are generally more successful than members of other ethnic groups. They have higher rates of high school and college graduation and higher average income than other groups.

Although educational achievement and economic success do not protect them from discrimination, it does place them in a much better position to defend their rights.