– According to a twitter user, this woman gave birth to a baby in an open classroom two days ago in Agatu, Benue state and has been without medical attention since then.

According to the person who tweeted the information, the baby was naked except for a wrapper and still had a great part of his umbilical chord still attached.

Tweet About the Woman That Gave Birth in Classroom

The Representative of the United Nations High Commissioner for Refugees to Nigeria and Economic Community of West African States (ECOWAS), Mrs. Angele Dikongue Atangana has stated that the level of killings and destruction perpetrated in Agatu local government by herdsmen is the worst in history.

Also, the Federal Government has been enjoined to handle the matter of grazing by Fulani herdsmen objectively, in order to avoid a crisis in the country.

Atangana, who was led on the tour of the area by the Deputy Chairman House of Representative Committee on Internally Displaced Persons, Refugees and North East Development Initiative, Ezekiel Adaji, also described the damage as unimaginable. 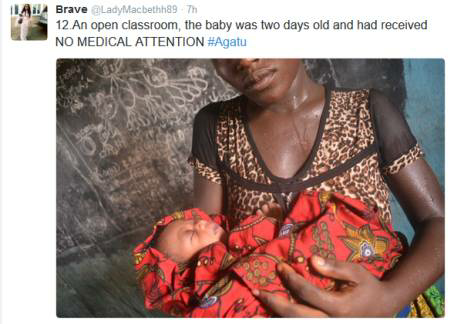 Woman holding her new-born-baby in classroom

The UN Representative, who said the plight of Agatu people deserved both national and international attention, stressed that it would be difficult for the affected people to rebuild their communities with external help.
“In my 20 years of working as a humanitarian, I have never seen such a level of destruction. If steps are not taken, the crises can affect the country as a whole,” she said.

She noted that the damage caused by the herders was similar to what was happening in the North-east, and assured listeners that her commission would aid in the rehabilitation of the displaced persons.

Addressing the Internally Displaced Persons (IDPs) at the Ugbokpo camp, Mrs. Atangana disclosed that the commission had donated non-food items worth over N20 million to the IDPs, stating that the items were already with the State Emergency Management Agency, SEMA in Makurdi.