University of Lagos Shut Down As A Result Of Fuel Crisis

In a circular issued Thursday, the school said the closure was also due to the difficulties faced by the “large number of students” living off campus to attend classes as a result of the lingering fuel crisis.

“Senate noted that the problem of poor municipal service is a national issue that the governments at both state and federal level are addressing,” the circular stated. 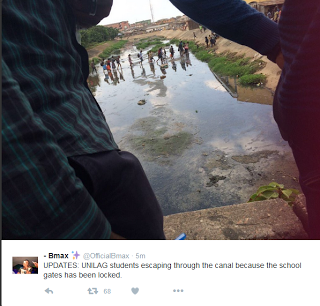 Students escaping through canal because gates have been shut

Scores of students on Thursday blocked the major road leading into the university, including access to the school’s Senate building and the Assembly Hall where Rahman Bello, the Vice Chancellor, was attending an event.

‎In the circular on Thursday, the university management said it was suspending all academic activities on campus to forestall further breakdown of law and order. The management also ordered the students to vacate their halls of residence immediately.

“A decision to re-open for normal academic activities will be made as soon as municipal services improve,” the circular said.