A total of 8,205 UNIPORT fresh students took the Matriculation Oath and Pledge at the 39th Matriculation Ceremony of the University of Port-Harcourt for the 2017/2018 academic session. 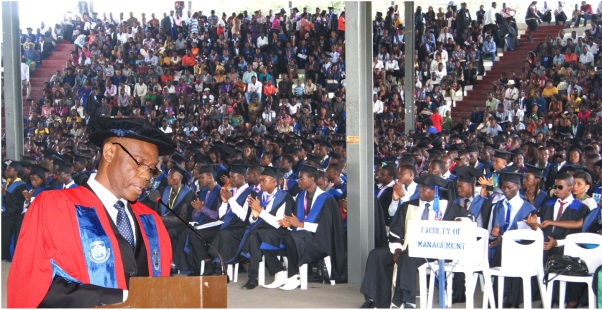 The Vice-Chancellor, Professor Ndowa Lale, while administering the Matriculation Oath on the newly-admitted students on Thursday, March 29, 2018 at the Convocation Arena, University Park, warned them against engaging in acts that could cut short their status as students of the University.

Professor Lale congratulated the students for being selected among the 39,177 candidates that chose the University as their first-choice destination for tertiary education. He charged the newly-admitted students to stay away from negative tendencies that would be detrimental to their success in the University, advising them to take their studies very seriously if they hope to succeed on their career path.

“To achieve all round success, students must shun such distasteful practices as examination malpractice, stealing, alteration of academic credentials, fighting, intimidation of fellow students and staff, prostitution and indecent dressing. These vices will ruin the life of any student who decides to engage in them, while their families and communities will be ashamed to be associated with such characters,” the Vice-Chancellor declared.

He further warned that those who may decide to engage in the twin evil of cultism and violent acts will be decisively dealt with in line with the Matriculation Oath they had voluntarily taken, reminding them that the Rivers State Government had recently upgraded cultism and kidnapping into capital offenses.

“The Senate of the University has prescribed stringent measures against any student who may wish to take up membership of any cult group,” he further warned the new students.

Professor Lale advised the students to be committed to their studies which is their primary reason for being in the University, assuring them of continued efforts by the authorities to provide a conducive atmosphere for learning.

“In today’s Matriculation Ceremony, you will commit yourselves to abide by the stipulated rules and regulations governing the terms of your admission and by the civilised manner in which any community of scholars conducts its affairs,” he told the students, reminding them that they can only be awarded the degree of the University of Port Harcourt if they are found worthy in character and in learning.

The Vice-Chancellor also advised them to go beyond paper qualification to embrace practical application and capitalisation of knowledge. “We want to train students who can solve the problems of society in a practical way,” he said, advising them to endeavour to pay the stipulated charges as at when due to avoid putting their student status on hold.

A breakdown of the figures gotten from the school website is as follows:

76 candidates were admitted through the Direct Entry mode.

The Matriculation Ceremony was preceded by a one-day Orientation exercise, which took place on Tuesday, March 27, 2018 at the Convocation Arena. The fresh students were exposed to various topics bothering on the rules and regulations governing the University, including the privileges due them as students.