Students of the Osun State University, today marched to the streets to protest N10,000 late registration fee imposed on them by the management of the school. 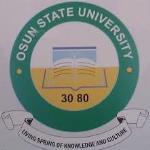 The Committee of the Students’ Joint Campus, pleaded with the vice chancellor of the institution, Professor Labode Popoola to remove the N10,000 charge for late registration by students.

According to the students who said the management of the institution had closed the school portal and reopened it after much pleading, but added a sum of N10,000 as a penalty for the late registration.

The students pleaded with the management to reverse their decision, considering the present economic situation of the country.

They also complained that most of the students are yet to complete their courses registration and the school system is yet to be known by the newly admitted students.

Also, the aggrieved students wrote a letter to the Speaker of the Osun State House of Assembly, Mr Najeem Salawu in which they urged him to intercede on their behalf.

Meanwhile, the VC of the institution had earlier complained that the students were in the habit of not paying school fees at the appropriate time and that some of them were indebted to the university to the tune of N2billion.