All aspirants who were a part of the 2015 UNIOSUN Part-Time Screening Exam can now proceed and check their Results/Admission Status online.

See the steps to check your admission status on the  UNIOSUN School portal;

1) Visit the Osun State University admission status checking portal via the link below: 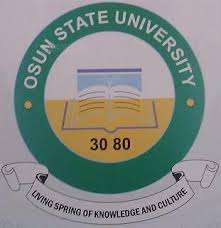 Osun State University is set up as a conventional, multi-campus university charged with the production of high quality, well–rounded, globally competitive and entrepreneurial graduates who are catalysts for rapid and sustainable socio-economic development of Osun State and Nigeria. Although the university is intended to be a conventional university, it shall optimise the application of Information and Communication Technologies (ICTs) in its teaching, learning and research activities.

The university shall be an equal opportunity institution where no person shall be required to satisfy requirements pertaining to race, (including ethnic grouping), sex, place of birth, family origin, religious or political persuasion as a condition of becoming or continuing as a student, the holder of a degree or other awards of the university, or of appointment or employment at the university. The university shall however reserve the right to impose any disability or restriction on any person where such a person wilfully refuses or fails on grounds of religious belief or similar grounds, to undertake duty generally and uniformly imposed on all persons or any group of them and which in the opinion of the university, is reasonably justified in the interest of the State or the nation.

Although the university shall in the tradition of the best universities in the world offer opportunity to suitably qualified candidates from all over the globe, it shall take cognisance of its catchment areas in line with established government policy to facilitate exploitation of the enormous human and material resources in the State for sustainable development.