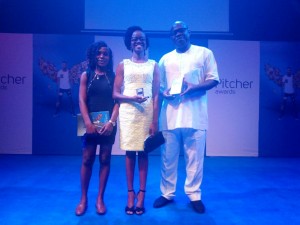 Oluwamayowa Oreoluwa Adeyemi and one of her lecturers, Dr. Shaibu Husseini at the Awards

The Creativity Week which held between March 22nd and March 25th at the Muson Centre, Onikan, Lagos State, Nigeria, is the Pre-Cannes Lion’s Festival programme organised by Chini Productions who are the official Cannes Lions Festival Representatives in Nigeria.

Oluwamayowa’s creative advertising proposal was adjudged the best that was entered by students across several higher institutions in the continent.

Mayowa now gets the opportunity to represent Nigeria and indeed sub Saharan Africa at the Cannes Lions Festival held annually in Cannes, South of France in June.

The Cannes Lion is the world biggest Advertising festival held annually in France.

Oluwamayowa’s feat at the competition earned her lecturer and Head of the Department of Mass Communication, UNILAG, Professor Abigail Odozi Ogwezzy-Ndisika the award of Best Teacher.

Other feats at the Awards Night were: