A new acting rector has been appointed in the Oke Ogun Polytechnic, Saki (TOPS). Details are as follows. 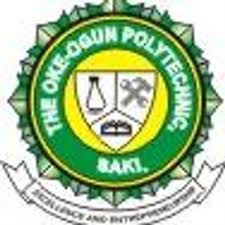 The Governing Council of The Oke Ogun Polytechnic, Saki, on Wednesday, 30th of December, 2020, reached a final conclusion in appointing a new Rector for the Institution who is to act in that capacity.

In an official letter released by the Governing Council of the Institution, which is designated to Engr. M.B Fasasi with the heading “APPOINTMENT AS ACTING RECTOR”, clearly states

“I am delighted to inform you that the Governing Council of The Oke Ogun Polytechnic Saki (TOPS) at its meeting held today 30th December 2020 appointed you as Acting Rector for the Institution.”

According to the letter, the appointment of the New Acting Rector is to take effect from the first day in the first month of 2021, 1st of January, 2021, while the incumbent Acting Rector of the Institution, Esv Ogunmola’s termination takes effect on 31st of December, 2020.