The suspension of student’s union activities has been reversed by the management of Osun State Polytechnic, OSPOLY, Iree. 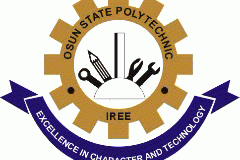 This was stated clearly in a memo pasted around the campus and signed by the school registrar, Mr Adeniyi Odedeyi.

The memo partly reads, ” In view of the above, I am directed to inform the entire students that the management has magnanimous considered the letter of appeal on resolution of internal dispute between the students union executives and the students representatives council written by two warring leadership of the students union Government dated 12th May, 2016.

“In the light above, the management has resolve to lift the suspension order place on students Union activities effective from today Monday 16th may, 2016.”

It could be recalled that the union activities was suspended on 10th May, 2016 which was due to rancor between the two arms of Government.

The management urged every students to continue to be law abiding.