SSANU, NASU And NAAT To Resume Indefinite Strike On Monday

The Joint Action Committee has directed the Senior Staff Association of Nigerian Universities, Non-Academic Staff Union of Universities and Associated Institutions and National Association of Academic Technologists to resume strike on Monday. 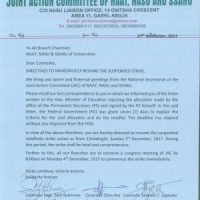 It was learnt that the reason for the strike is dissatisfaction over the sharing of the 2 Billion Naira from the government.

JAC had earlier sent a letter to the Federal Government asking that the criteria for the allocation be explained. The time given for the FG to respond has elapsed and yet no response.

In view of this, the union has directed all its members to resume indefinite strike action as from 12 midnight, Sunday, December 3, 2017. During this period, the strike shall be total and comprehensive.