SLU Courses: The list of courses offered by Sule Lamido University (SLU) are displayed on this page. Candidates who wish to apply through JAMB should click on any of the courses to see the course requirements.

The history of Sule Lamido University dates back to 22nd June, 2010 when the State Executive Council constituted a 9–Member Technical Committee chaired by Prof. Munzali Jibril, a former Executive Secretary of the National Universities Commission (NUC). The Committee submitted its Report on 31st December, 2010 which included an Academic Brief and the Draft University Law.

The State Executive Council, in February 2013, considered the Report and approved the establishment of a university to be called “Jigawa State University, Kafin Hausa”. The University was envisaged to be ICT-driven and entrepreneurial in orientation. The Academic Brief provided that the University should commence admissions in the 2013/2014 session and run through a four-phased five-year development, when it would have three (3) Schools, twenty (20) Faculties, fifty-nine (59) Academic Departments and two hundred and sixty-one (261) Programmes across the levels by the year 2032.

The University was licensed by the NUC on 17th July, 2013 as the 39th State–Owned University and 129th in the Nigerian University System (NUS). With the appointment of Principal Officers and subsequent constitution of Management in December 2013, the UIC recruited pioneer Teaching and Non-Teaching Staff for the University, preparatory to the commencement of academic activities in September 2014.

Faculty of Natural and Applied Sciences

As of March 2018, the National Universities Commission (NUC) has granted accreditation to all the Fifteen (15) Programmes offered in Sule Lamido University (SLU), Kafin Hausa. The approval was contained in a letter addressed to the Vice-Chancellor of the University, Professor Abdullahi Yusufu Ribadu by the Executive-Secretary, NUC Professor Abubakar A. Rasheed. This followed a visitation by different accreditation panels sent by the NUC with a view to ascertaining whether the programmes run by SLU conform with Commission’s standards or not.

Thirteen (13) out of the fifteen programmes run in the University were granted Full Accreditation while two (2) programmes were given Interim Accreditation. With this development, the University has now got clearance to continue admitting undergraduate students in all its fifteen (15) programmes and will be able to mobilise its graduates for the one-year mandatory national service under National Youth Service Corps (NYSC). 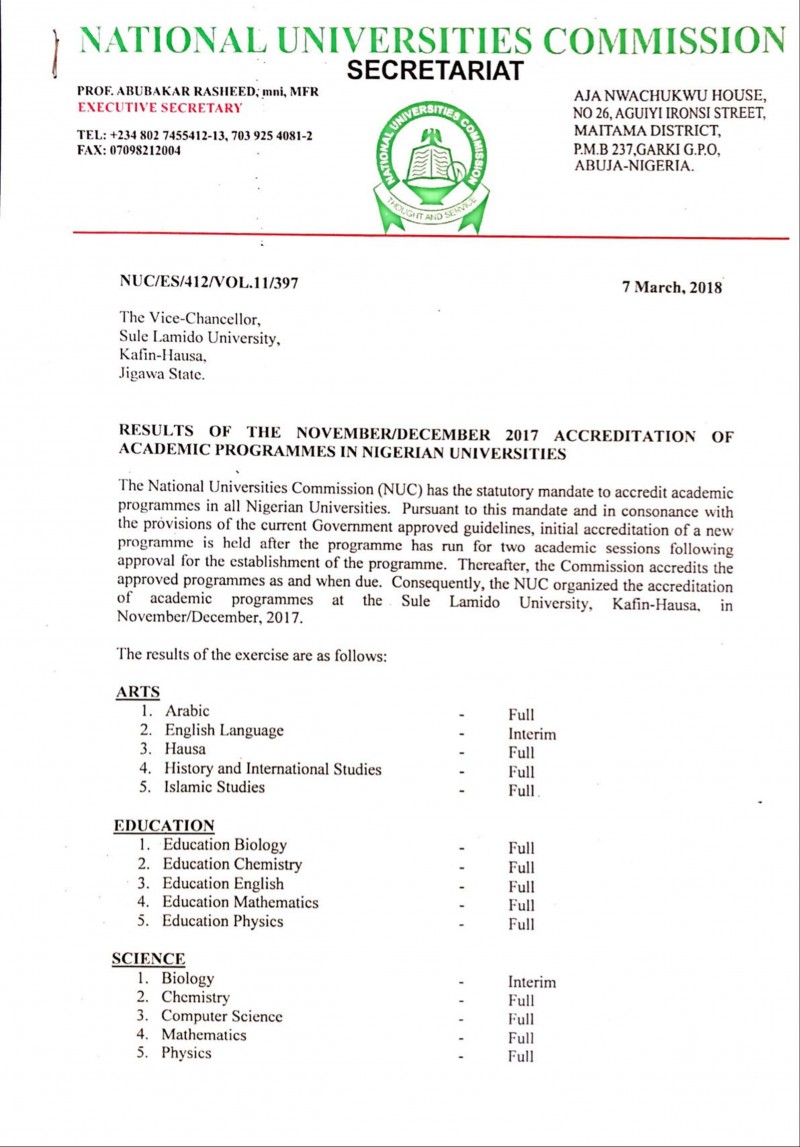 Here is a list of courses offered by Sule Lamido University, Kafin Hausa, Jigawa (SLU), formerly known as Jigawa State University (JSU) and all candidates interested in studying at the institution are encouraged to take note: