See Phone That Can Be Washed Built By Japan Tech Company

With all the major breakthroughs in Science and advancements in technology, a Japanese technology company is still innovating and they have come up with a phone that can be washed.

This Japanese mobile phone company has created a phone which it claims can be washed with soap without any damage to the device.

On the average, a mobile phone is thought to be covered in more bacteria than the average toilet, which means mobile phones harbor numerous germs from clothing and hands. 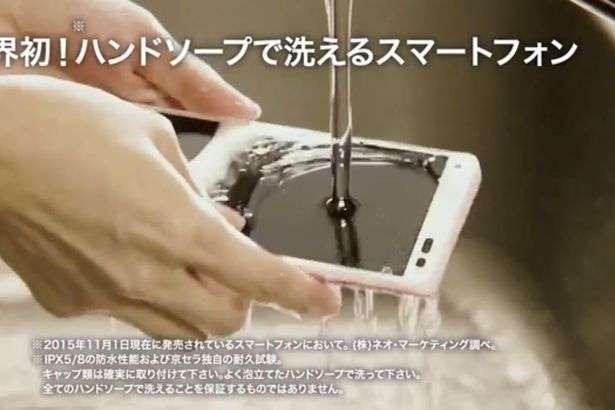 British online tabloid Mirror.co.uk reports that Japanese company Kyocera has designed a new phone that can be cleaned with soap and water.

The device, named Digno Rafre, can be “cleaned as thoroughly as a piece of tableware” and will be released in Japan next week.

The developers of the phone have not released any information on what keeps the phone working while wet except that it has no speaker and transmits sound through “connective tissue” as opposed to a traditional speaker.

The phone will run Android 5.1, sport a 13MP camera and measure 5-inches in length. It will cost £310 but unfortunately, will not be released outside Japan.