– Ayodele Daniel Dada is a graduate of psychology from the UNILAG who made history by being the first graduate to finish with a CGPA of 5.00.

Azuka Onwuka of Punch give opinion of how President Muhammadu Buhari missed a chance to recognise the 5.00 cpga holder, Ayodele Daniel Dada but says it’s not too late to celebrate the genius.

A big opportunity came to President Muhammadu Buhari to shine some weeks ago but he let it waste. A graduate of the University of Lagos, Mr Ayodele Daniel Dada, made history by being the first graduate of the university to make the maximum cumulative grade point average (CPGA) of 5.00 point out of 5.00. 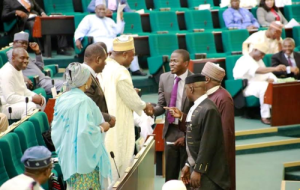 That includes courses from other departments and faculties, which were not related to his course of study. For example, imagine an arts student who hates computations and scientific theories being made to take a subject in the natural sciences as well as computer.

Many of such people would just pray to get the minimum score in those non-related but compulsory courses. Their dream will be to just pass those courses so as to be free to focus on the directly related courses that made them come to the university in the first place.