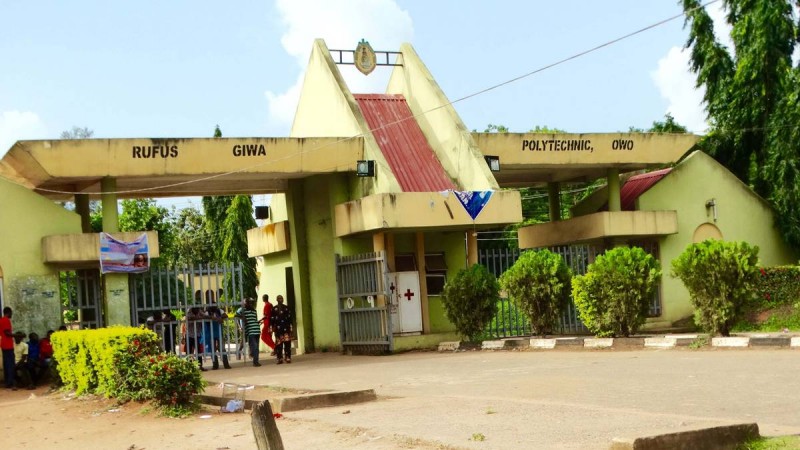 All candidates who applied for admission to the Rufus Giwa Polytechnic, Owo during the 2019 Unified Tertiary Matriculation Examination (UTME) conducted by the Joint Admissions and Matriculation Board (JAMB) and those who wrote the examination and now wish to secure admission into the Polytechnic that they should register on-line for screening exercise for the 2019/2020 Academic Session.

The applicants are also enjoined to note that only candidates who scored 120 marks and above are qualified to apply for admission.

Candidates are enjoined to visit the Portal of the Polytechnic (sf.rugipo.edu.ng) for further information and register after paying through UNIFIED PAYMENTS PLATFORM with the use of master card or verve card in any Commercial Bank throughout the country for Screening fee, Administrative fee and portal fee to access the Website with effect from Thursday, 11th July, 2019.

Meanwhile, the screening fee is Two Thousand Naira (₦2,000.00) only. Applicants for the screening exercise are also requested to upload the following items of information:

Candidates are advised to print their admission screening forms and the dates for their Post- UTME tests on or before 3rd October, 2019.

The screening exercise shall hold between 8th and 11th October, 2019.

Rufus Giwa Polytechnic is a tertiary learning institution in Owo, Ondo State, Nigeria. The National Board for Technical Education has approved it as a state-owned polytechnic. It is also accredited by the Institute of Chartered Accountants of Nigeria.

The polytechnic has several department in the Faculties of Engineering, Science and Technology, LEMS, etc. It has a mandate of training and developing techniques in Applied Science, Engineering, Environmental Studies, Accounting, Commerce and Home Economics.

In June 2003 the polytechnic was renamed after Chief Rufus Folusho Giwa, a prominent businessman from Ondo who had become president of the Manufacturers Association of Nigeria (MAN). Students protested the change of name and the school was shut down, only reopening on 29 September 2003. In July 2009 the polytechnic closed down due to a strike by the staff over non-payment of 10 months monetization arrears. In February 2010, Ondo State Governor Olusegun Mimiko inaugurated a 16-person governing council for the polytechnic. In March 2010, Mimiko said that his government had paid the monetisation arrears of N210 million owed to the polytechnic.