According to the Herald, the music legend and reggae singer who is known for such hits as Under Pressure and many others was at his daughter’s graduation recently.

The second daughter, Sennami Onwubuya, graduated from the St. Cloud University, Minnesota US and Ras Kimono was in attendance.

Naturally he went on his Facebook wall and posted some pictures, expressing his pride at his daughter’s achievement. He wrote, “Hip, Hip, Hip, Hurray my second daughter Sennami graduated from St. Cloud-University in Minnesota U.S.A We Give Thanks To The Most High Almighty JAH” 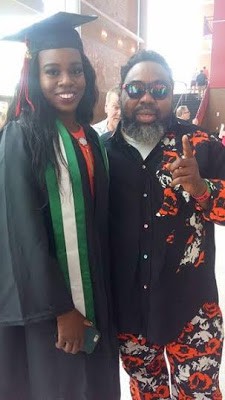